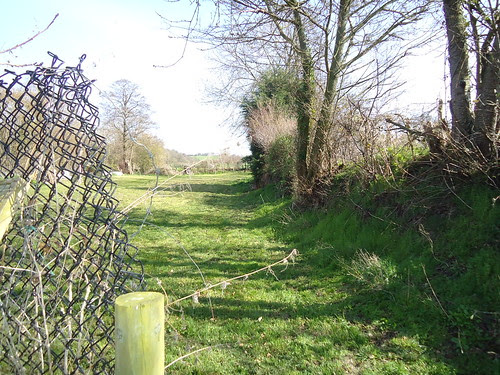 We were going to go to Bala Lake today but petrol at £1.41 per litre and the thought of being marooned at the pumps was a bit too much to contemplate.  We didn't go, so a day at home. Been a fantastic day here all the same.  Too hot to work out in the sun and catching up on my favourite blogs instead.
Went for a walk on my own down around the mill ground earlier on. You can't believe how everything's greening over even from one day to the next. It really is. 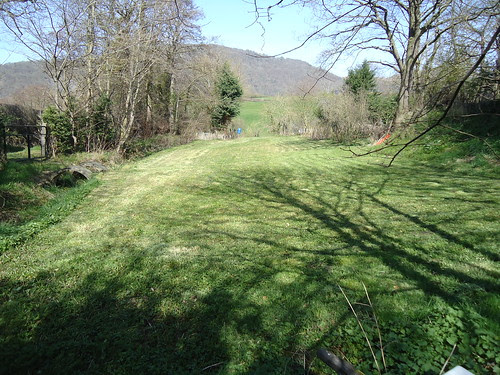 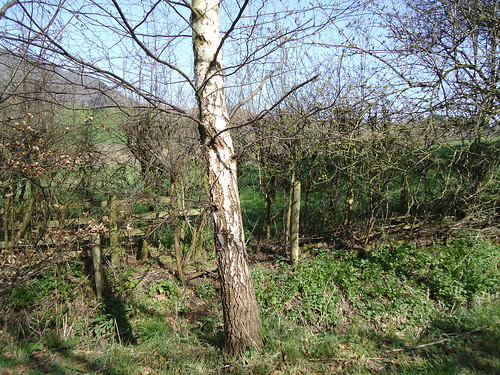 The silver birch we planted about five years has just grown way up. The place is getting too big for us to manage now. We ought to think about selling it, but where do we go? Don't know! 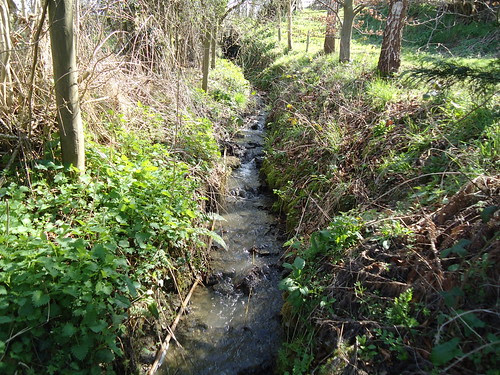 I followed the brook. I love the swishing sound it makes. There are brown lichen covered rounded cobbles and stones. They're a bit slippery when  you cross to the other bank and you have to watch how you go. 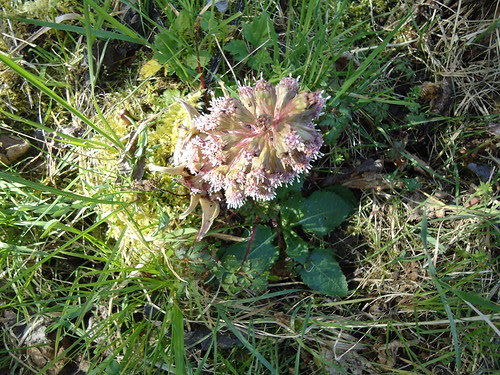 I love wild flowers and they're everywhere just now. 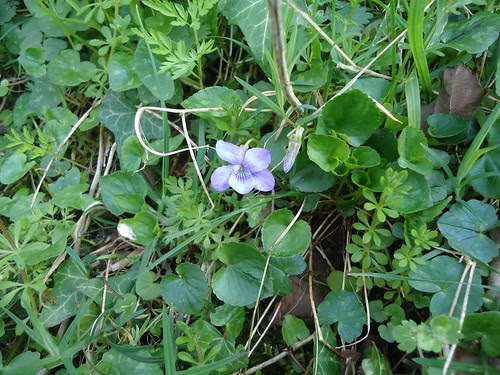 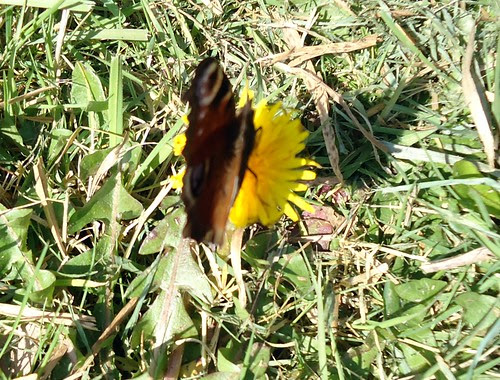 The best things in life are free. They are! Just look at them. There's the ploughed earth waiting for the potatoes and beans and onions to be planted. 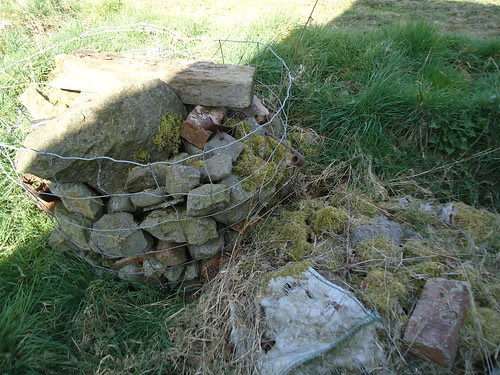 And the stones from the mill building we intended to renovate. It won't get done now. 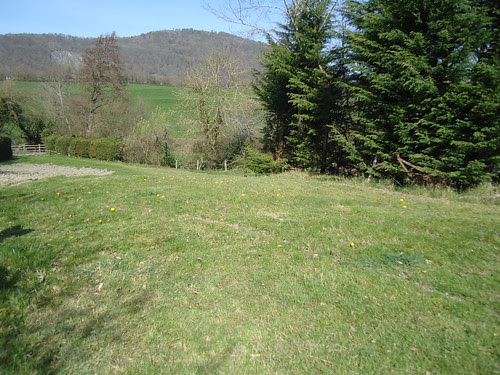 And some other mountain, way across there in the distance.
Did you do what you intended to today?
Posted by Molly at 09:17 28 comments: 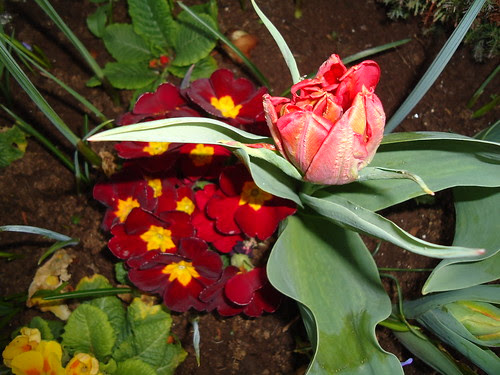 British Summer Time officially started this morning. Who forgot to move the little clock hand an hour on then?  I set the alarm to go off at 6.00 am which would have been 5.00am if it had still been Saturday if you get my drift. Everywhere was blanketed in thick fog here.
It was a brilliant day yesterday and I spent nearly all day in the garden. I forked and dug and barrowed and pruned, mad woman that I am.  Today, I woke up with every bone aching and a tearing pain in my stomach, made a cup of tea and went back to bed until 11-o-clock Sensible ha!

This is what I started with and I've still got another two and a half to do. 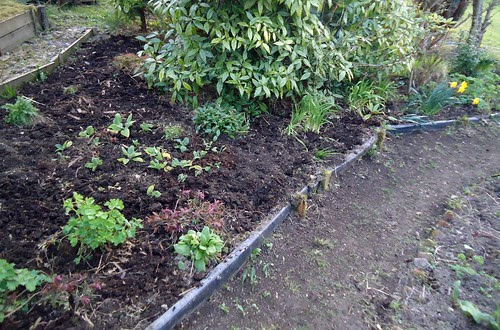 But it' starting to improve a bit. I quite like when you can see where you've been. 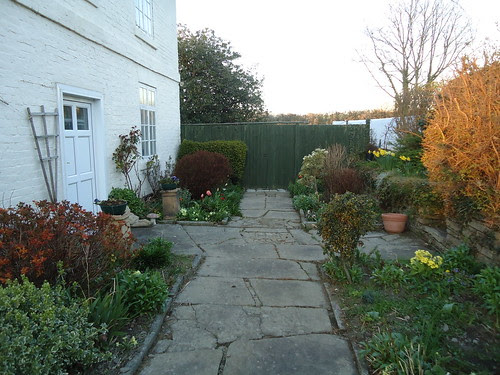 Got  a few bits growing in the poly tunnel too. The new potatoes have just come through. Cabbage and caulies almost ready. Lettuce planted out. Sweet corn germinated. Tomatoes potted up. Beetroot in plug plants ready to go out. Parsnips and carrots through. Onions with green shoots. Strawberries just starting to come into flower.
Has your weekend been wild as well?
Posted by Molly at 13:11 31 comments: The Luck o' the Irish 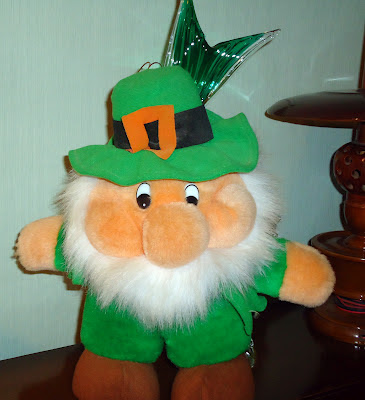 Irish Joke
Paddy and Michael were drifting on the open sea in a lifeboat. They'd just made a lucky escape from a burning freighter. While Paddy was rummaging about under the seats, he found an old lamp beneath some tarpaulin. Secretly hoping that a genie might appear Paddy rubbed the lamp vigorously. To be sure, a genie materialised in front of his eyes and told him that he would grant him one wish and one wish only. Paddy thought long and hard, 'Ah!' and then requested, 'Make this entire ocean into Guinness beer'.


Bing Bang, Pdang, the genie clapped his hands and the entire foaming sea turned into the best brew, the two had ever sampled.
Just as they eyed their good fortune, Michael's delight turned to a look of disgust at Paddy who'd just had his wish granted.
After a long tension filled silence, he spoke.
'Nice one Patrick! Now we're going to have to pee in the boat!'

May the road rise up to meet you.
May the wind always be at your back
May the sun shine warm upon your face;
the rains fall soft upon your fields
and until we meet again
May God hold you in the palm of His Hand 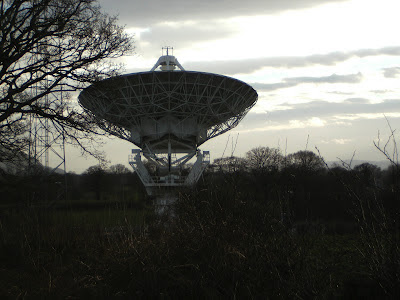 Driving home the other night, there was a fabulous view of a huge full moon and a splay of light almost like a triangle coming from it. I would have stopped in the middle of the road right there and photographed it - Murphy's Law - didn't have my camera with me. By the time I reached home, the light had gone.
Typical - d'you ever have moments like that?
Posted by Molly at 15:27 16 comments:


Been having a pot clearing day today, when I noticed this little beauty in the bottom of one of them. It was a bit sleepy still in semi hibernation. A few minutes in the sunshine and then I put it back to finish the winter. Aren't the colours an amazing work of art?
Posted by Molly at 14:26 18 comments:

I was listening to Radio Shropshire this morning. " Phone in and tell us in three words what you're going to be doing this Saturday," he said.
Somebody rang in and said, "Washing the curtains." Apparently they lived on a house boat.
Somebody else said," Waiting for tomorrow." - when the BIG match is on.
How would you describe what you did with your Saturday in just three words?
Me? What have I been doing?
"Looking for mole-hills." (Mad as a box of frogs)

It started with a packet of wild flower seeds I bought  last September - the ones you don't see so much of  any more.  They survived the winter and I wanted to move the biggest of them into pots to grow them on. Moles do such a good job of throwing the soil up into fine mounds and I wanted soil that had been neither sprayed nor fertilized.

We're lucky that we've still got quite a few varieties but intensive grazing, sprays and fertilisers are not doing them any favours. And how many will there be around for much longer?
The diversity and the richness of the colours are fantastic.

I found this video on You Tube and I love it. Just think - you're never going to be as young as you are today.