Curley, as it happened, was best man for his cousin Tommy Hiyab. A few months later Tommy and Mrs Tommy invited  him over to Ayelsbury to spend a few days. It was 1954 and by sheer co-incidence or not - the same time as the Motor Show was on over at Earl's Court. The one thing that Curley delighted in above all else was wheels  and more than that - new wheels. Curley as you might or might not have guessed was my Other Half's favourite uncle (here) and O/H spent  whenever he could on Curley's  Mid Wales farm during  school holidays. To his sheer delight, Uncle Curley invited him to go along on the pending trip.
Suit cases loaded and dressed up to the nines in his peaked cap, wide calico striped braces, new trousers and shiny town boots, Curley hauled himself into the driving seat of his Wolsey 444 with the walnut dash and leaned across on the passenger side handle for 'Corporal' to get in on the other side. He often called O/H 'Corporal'. Curley had a bit of a leaning towards the military, World War II and all that.
Earl's Court was mind blowing.  Never seen such sights - Rollers with fully equipped bars in the back,
''Well I go to sea!''
Aston Martins, shiny black Jags and Lister Bristols in racing green,
"Well. I go to sea!"
Being as they were in London, may as well make the most of it and go 'n have a bit of a look at Buckingham Palace, and educate young Corporal so to speak.
It was a bit of a maze around Hyde Park Corner and Curley'd lost his bearings a bit. Like they say - when in doubt - Ask a Policeman.  A copper across the road was on point duty in his white police sentry box. White leather gauntlets directing five lanes of traffic.  Curley halted the Wolsey 444, his new trousers barely brushing the tops of his shiny town boots and beavered across. Hooting, screeching chaos and mayhem all around him. He almost reached the sentry box and was just about to yell, 'Scuse me ....'  The leather gauntlets gesticulated wildly, a string of obscenities and cursing reverberated like steam off the sides of the box, the like of which he'd never heard in his life. Somewhat subdued, he weaved back to the Wolsey triple 4 and got in. Corporal looked at him expectantly. Turning the ignition on, and all Curley could say was
"Well I go to sea!"
Posted by Molly at 15:02 9 comments: 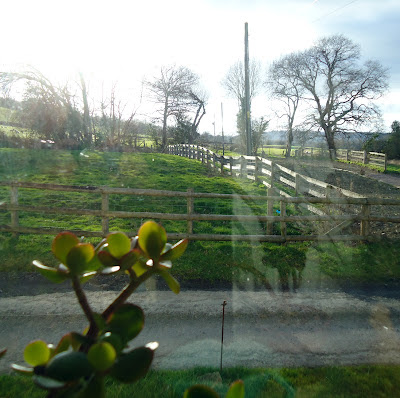 Looks like most of us had a good day, weather wise today. 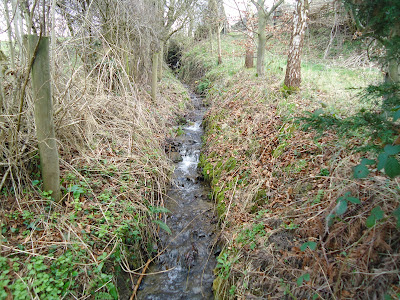 When I did the jobs I had to do I went for a walk down to the mill and followed the stream back up to the house. 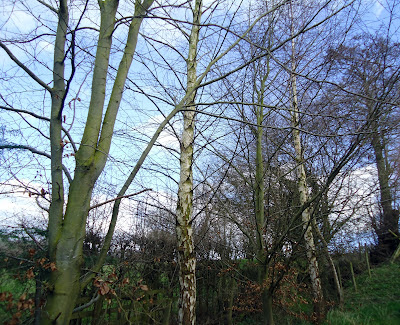 There's something just nice about almost total silence, me and my thoughts. I'm liking  that. You could hear a leaf crackle as you trod on it. Well not quite alone. My two cats, Fadger and Little Fadge never miss an opportunity to tag along and they were there exploring the undergrowth and enjoying the warmth for all they were worth. 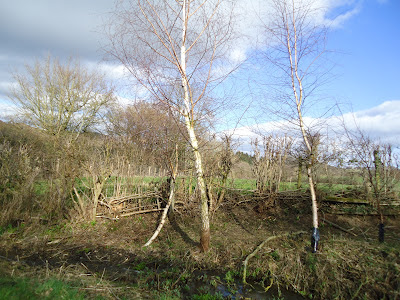 Despite the warmth of the sunshine though, the wind was still keen. You could almost sense the arm wrestle between Winter and Spring right there. 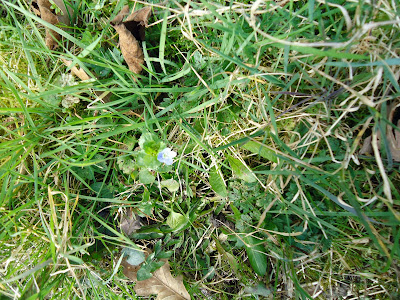 I found this  tiny blue  wild flower growing amongst the debris and flotsam of brittle dead leaves. It's common enough and I should know the name of it, but can't think for the life of me what it is? Whatever - it's one of Nature's understated works of art. I've loved my life today.
Posted by Molly at 15:34 24 comments:

Hi Molly,
I saw your pleas on Friko's blog. There's a thread in Blogger's help forum which will enable you to go back to the old dashboard and switch off word verification. Just read the whole (short) thread and follow the instructions.

Just been there and done that and turned wv button off (Hopes and fingers crossed)
Please leave a comment and tell me if its true
Posted by Molly at 12:47 17 comments: 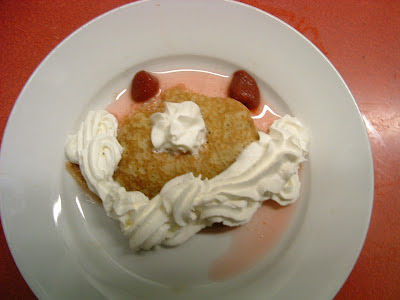 Who's having pancakes tomorrow ?  Grand daughter made this one :-
One ready made pancake in microwave for 40 seconds
One tin of strawberries gently heated
Half a tin of squirty cream

Jamie Oliver eat your heart out.
Posted by Molly at 15:47 10 comments:

Wind me up Buttercup

Just been into Delores/The Feathered Nest site about the dreaded word verification disease. I am on the new Google Interface which does not include a button in the settings for turning it off. Not to be beaten I went on Google Search for some help and came up with this brilliant site http://stupidblogtricks.blogspot.com/2011/12/turn-off-comment-word-verification.html
I clicked on the gear at the top of the page to get into the little box like it said.. Ha! that will cure it! No chance! Google's taken the option to go back to the old interface off the menu. Not only is word verification still  alive and kicking but it's started  breeding and there are now two fuzzy words all in black and white  to type in,  just for those of us who are short of something to do. 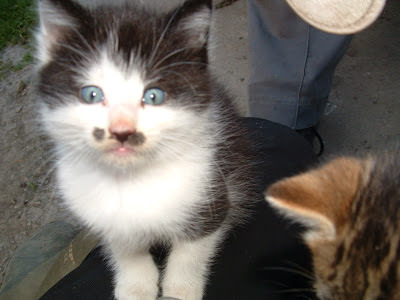 It was so sad to hear of the untimely death of Whitney Houston this morning. I love her music and always will.
May She Rest In Peace
Posted by Molly at 07:58 14 comments: 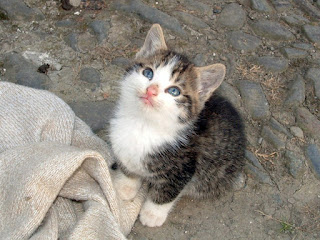 Too Good To Last

'In the bleak mid winter, and it's not been too bleak', I said. 'Ha!' It was absolutely perishing this morning. The day before yesterday, the sun shone in bright glitches and streamed shadows through the front door windows. It was nice.

This was one of the windows in the porch as you go into the house.

My plants on the window in the utility room, shivering their little heads off. 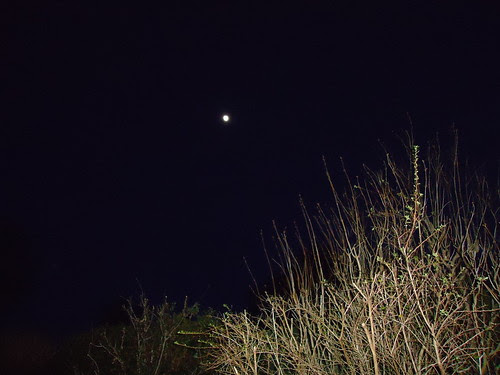 And outside, the moon at six o clock this evening - half an hour ago. It's interesting on the news about life on the dark side of the moon. What do you reckon on that? 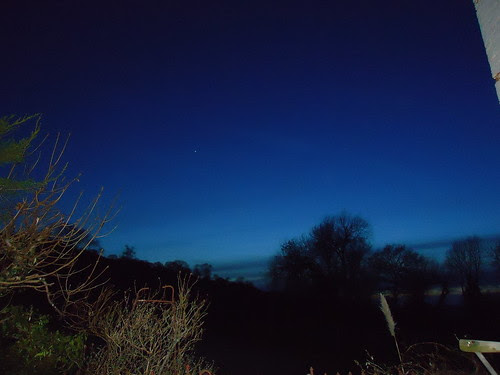 Only one star in the picture, but they're all coming out tonight and I think we're in for minus 10.
What's it like where you are?