Three or four years ago, Tom wrote a blog  on Starling Murmuration and posted this video.


A similar phenomena has happened at Westbury, Shropshire, this winter.  Westbury is a small village four or five miles away from where I live.There is, as far as I know, no near nature conservation area to encourage them, but something must have attracted their attention.  The starlings gather on the edge of dusk, thousands of them. The formations they make are beautiful and the bird song is amazing.
Posted by Molly at 11:31 21 comments: 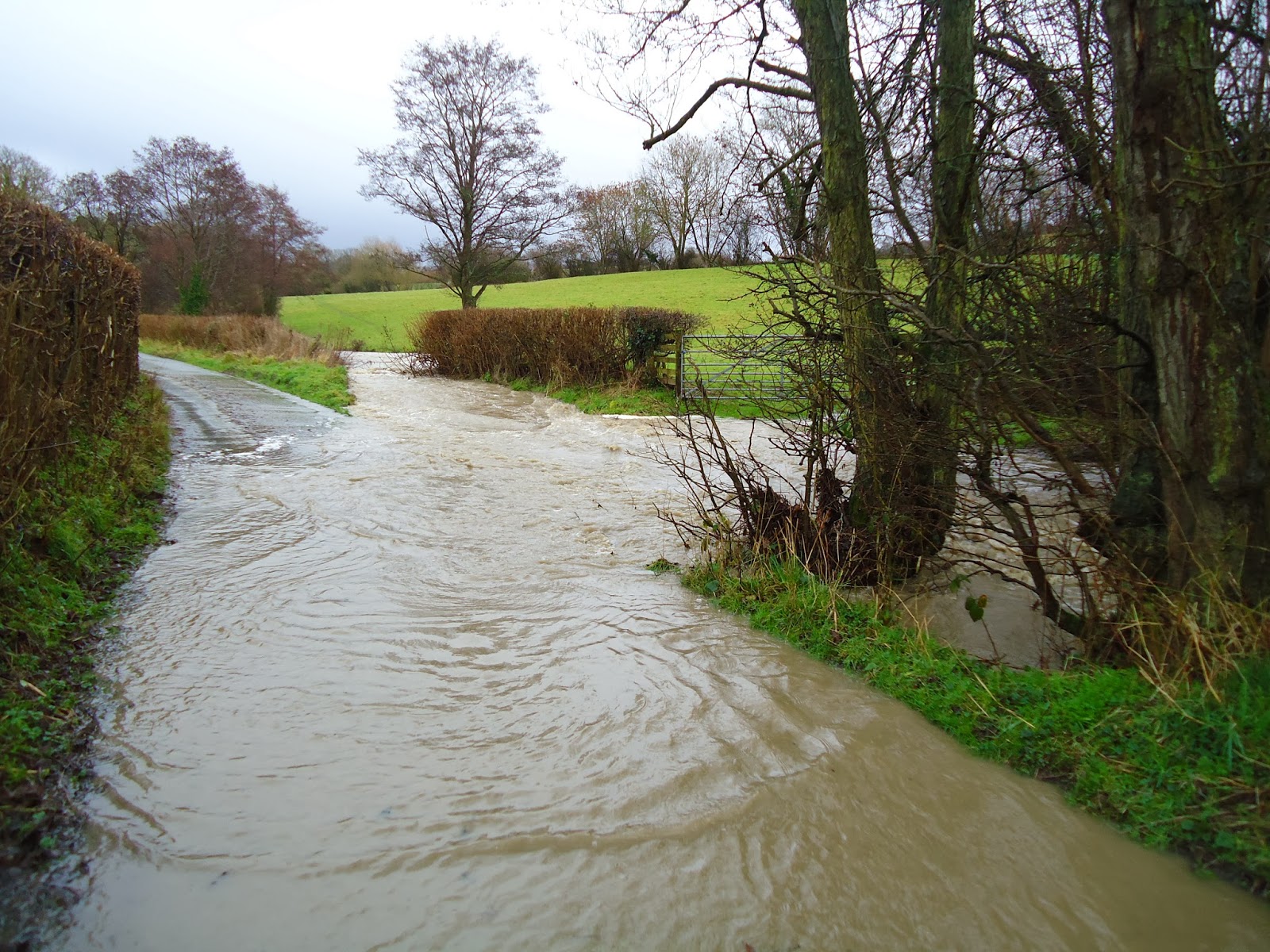 Heavy rain again last night, so much so that it woke me up. It was just like someone throwing buckets of water at the bedroom window. I lay there in the darkness, listening to the wind howling and waiting for the next deluge to hit the pane. There's something very comforting, being  warm and dry snuggled under the covers and listening to it all going on out there. We have been fortunate that the inside of our house has not been flooded and I really feel for those people who have had to deal with water in their houses for the best part of a month - not good! 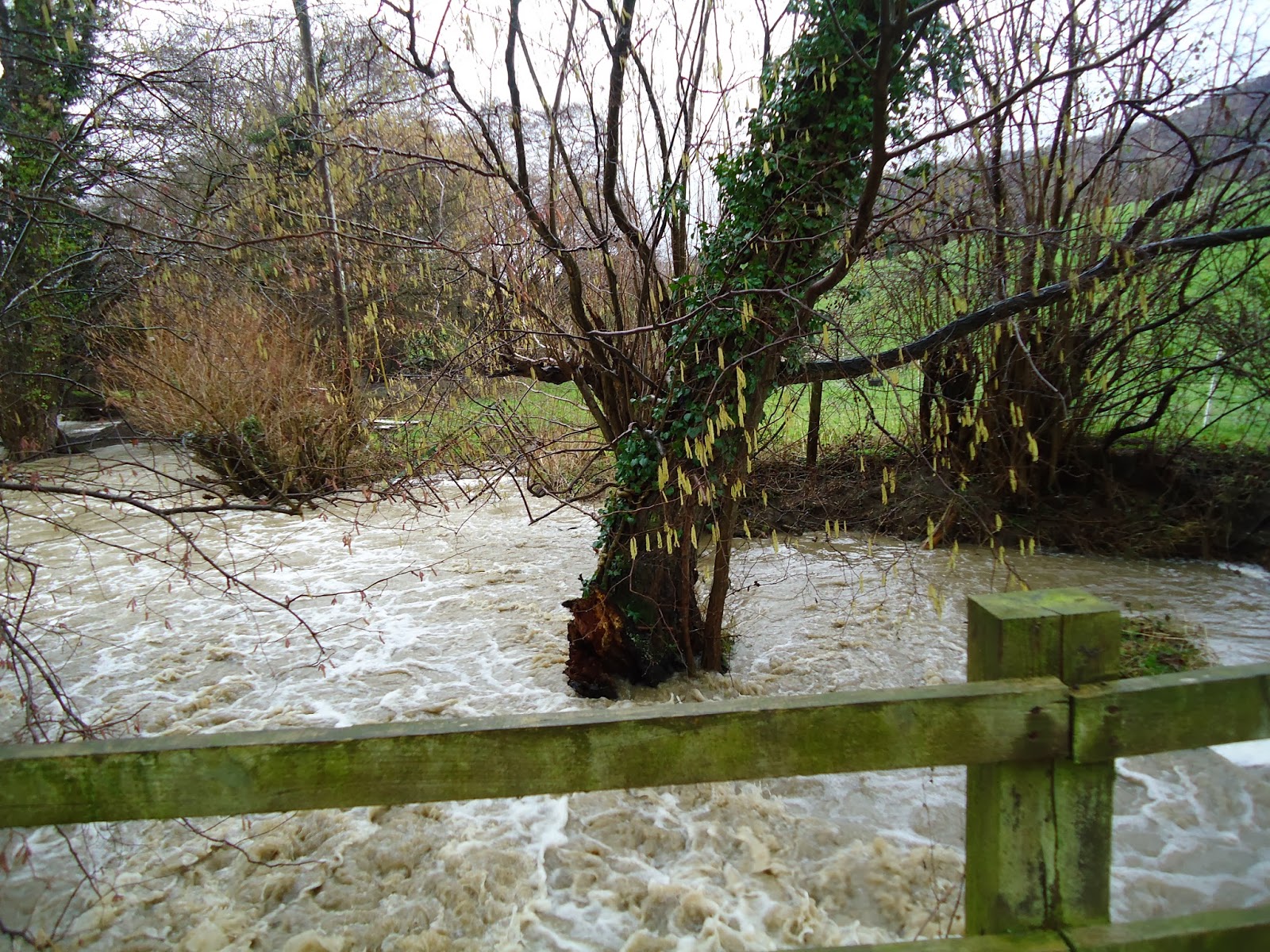 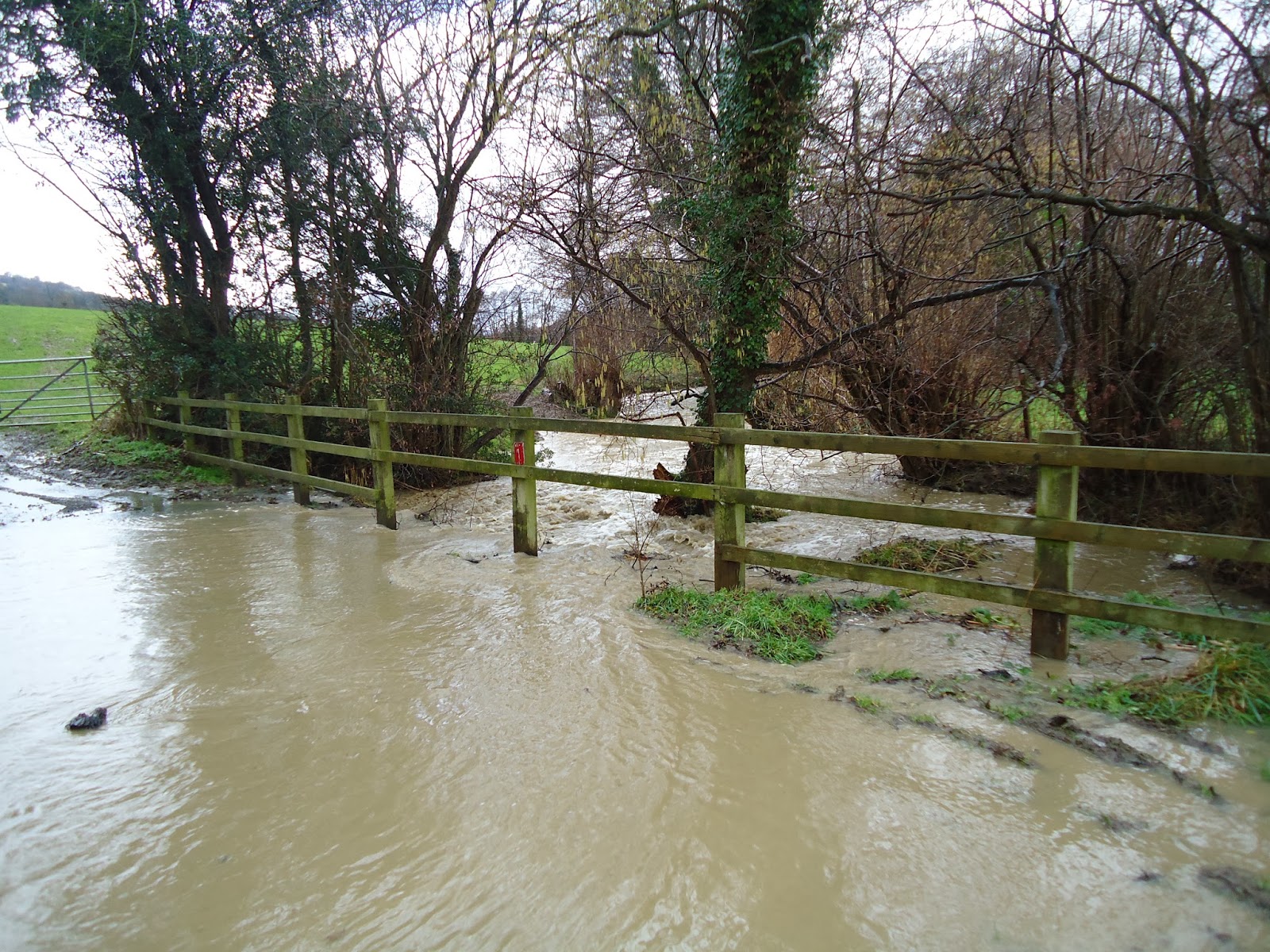 When the brook water rises, it carries all the brash and broken tree stumps from up stream and these get caught in the tunnels of the bridge under the road causing the minor or major mayhem according to the volume of water. The floods have been right up to the top of the posts.  I can remember a huge tree stump a few years back, being lodged on the top wooden rail and the foot bridge from higher up being dragged across the road by the current. 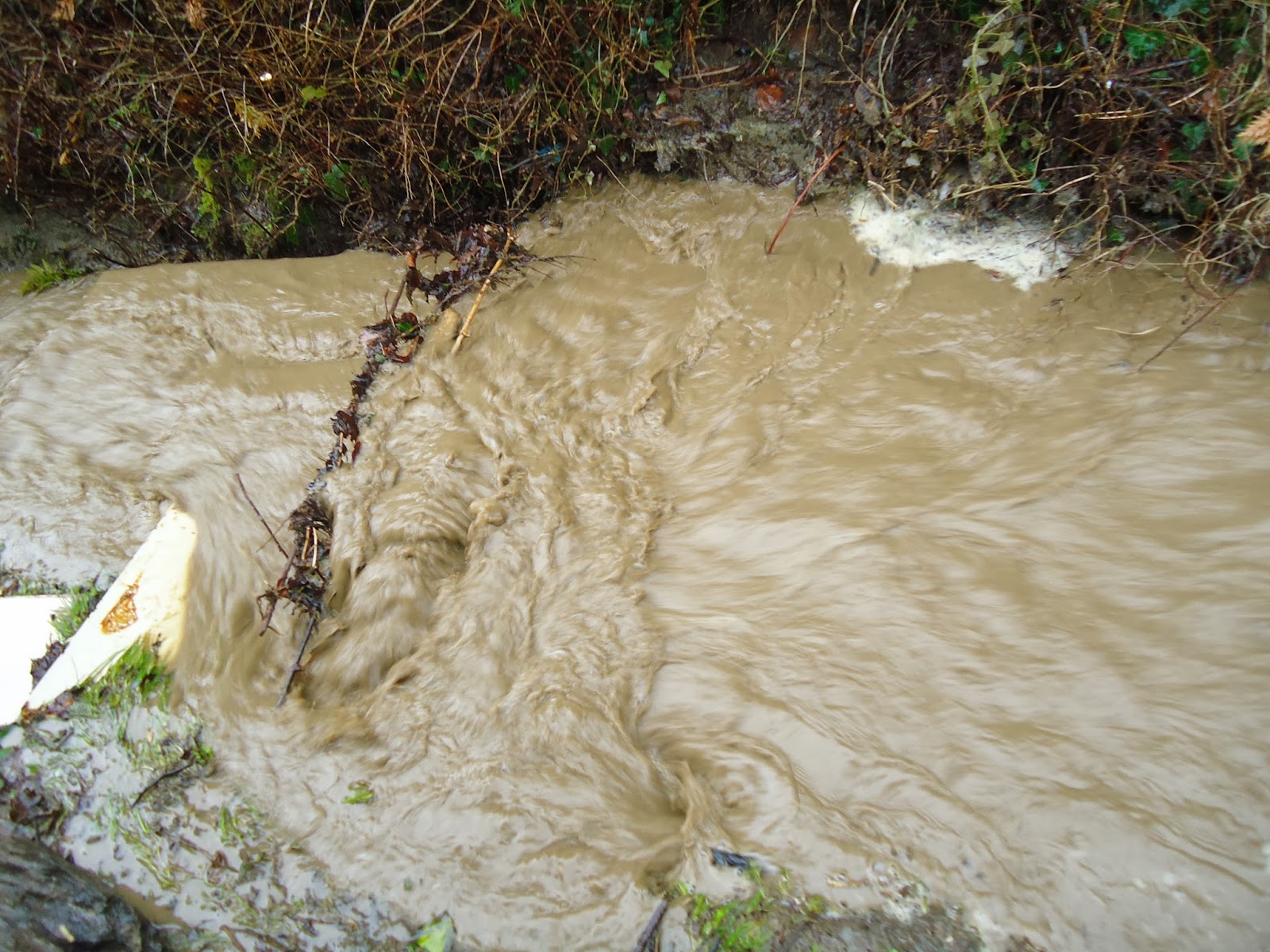 Another brook which marks the English/Welsh border along the edge of our garden was in full throttle. It carries the water right from the top of the Long Mountain and gathers a massive force by the time it meets the other and reaches the bridge at the bottom of our road. There's an iron grid across this one to stop debris blocking a long black tunnel a bit further down. We've toyed with the idea of using the water for hydro-electric power. O/H built a water wheel some years back but with hardly a trickle in the summer months, we never got round to installing it. 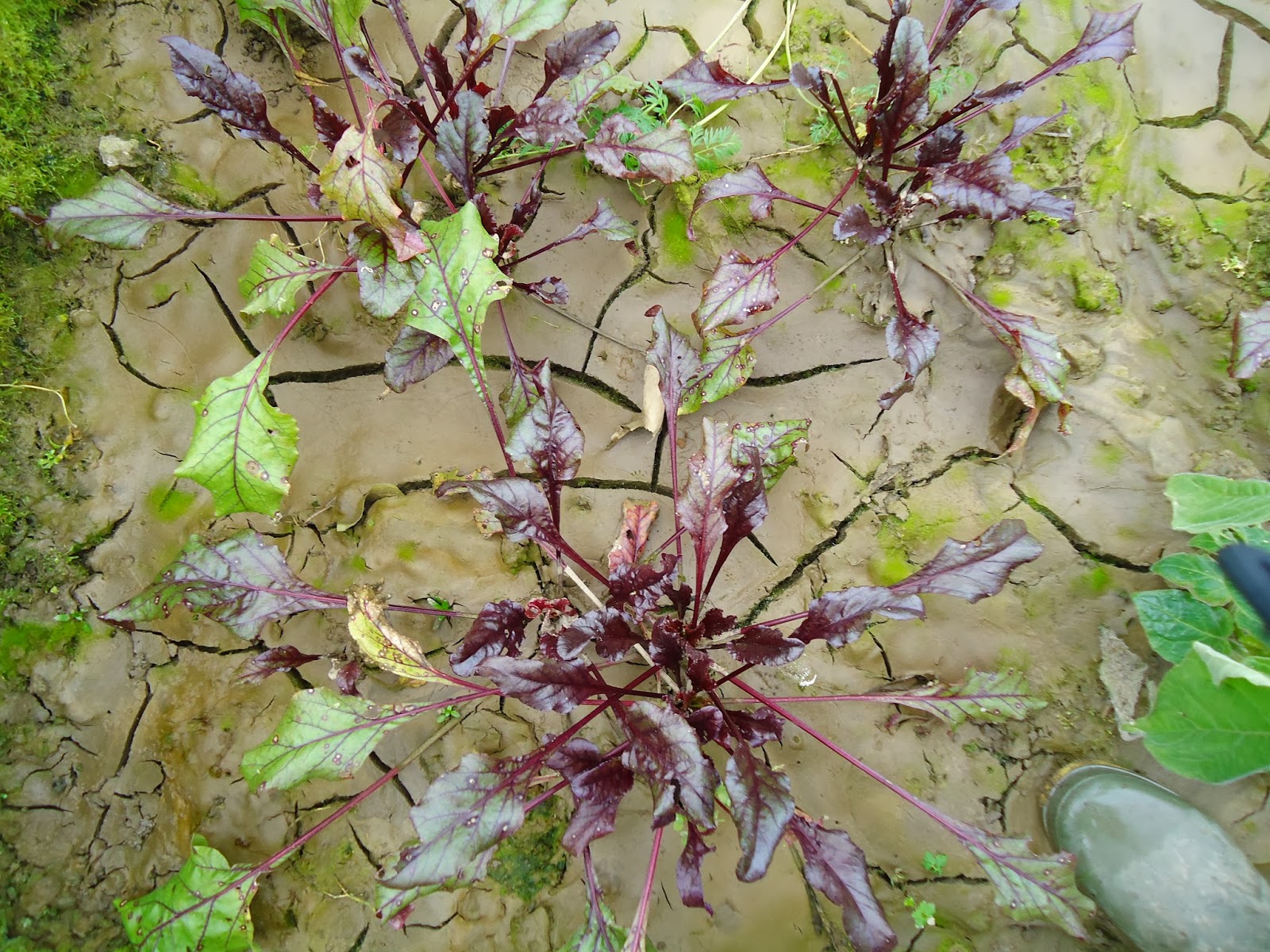 A couple of weeks ago, another grid higher up got blocked and we woke up to find sheets of muddy water flooding poly tunnels, garden shed and His workshop - Yuk what a mess! 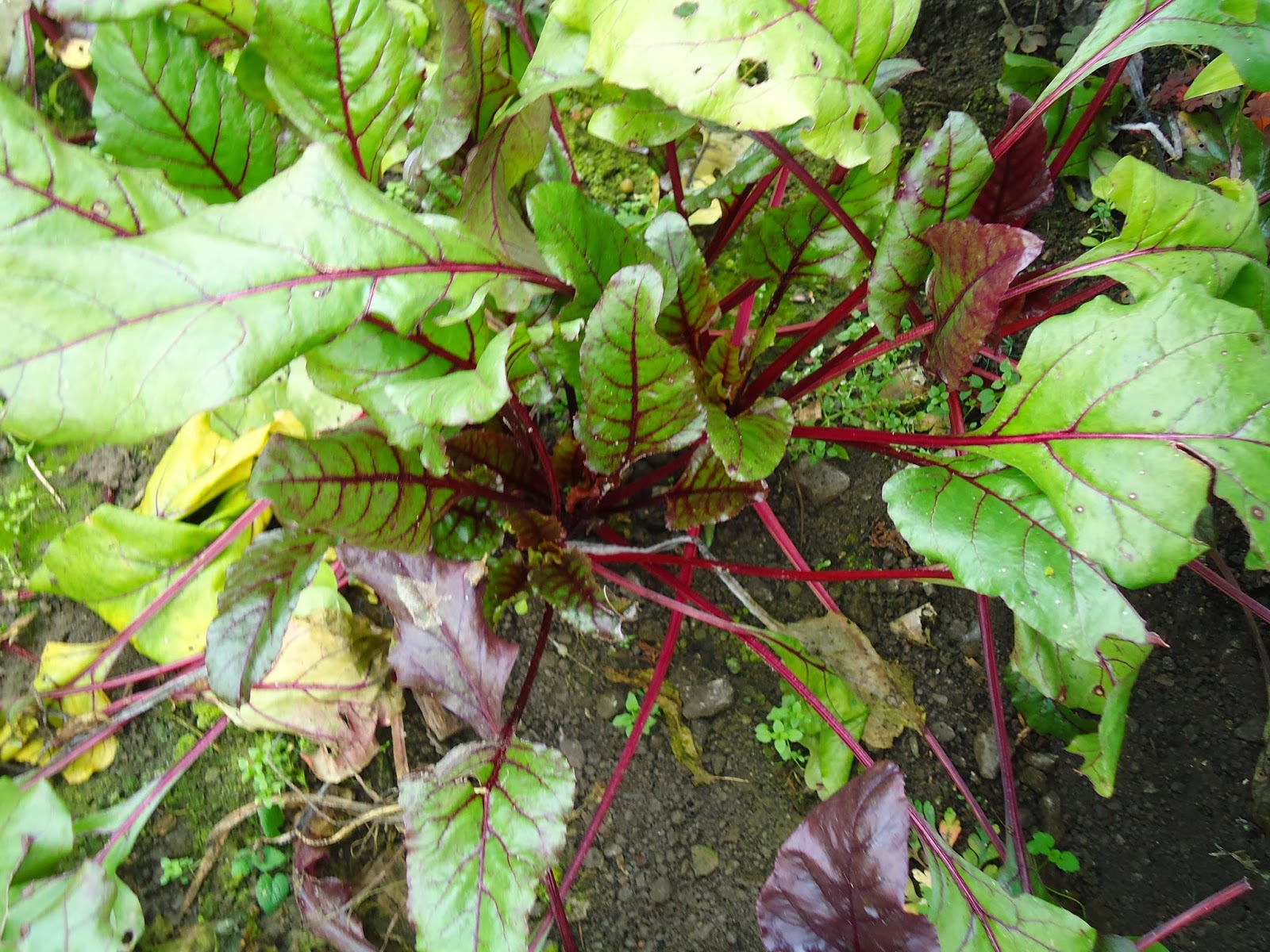 I sowed a few rows of beetroot at the end of last summer. Some of it's looking a bit poorly, but one little patch has survived, so not too bad. 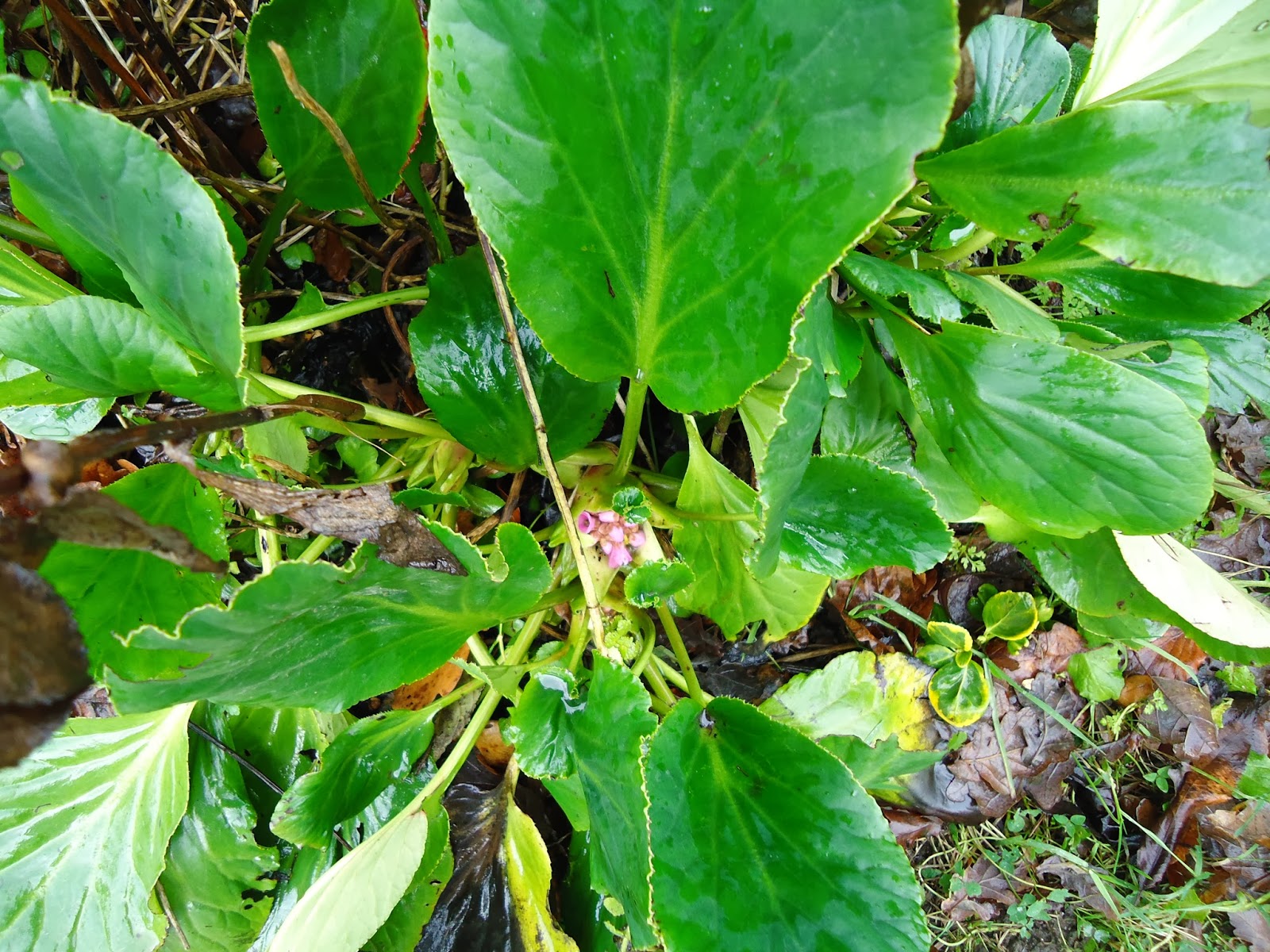 I noticed today too, as I took my camera round, the pink flower bud of a bergenia plant was just starting to come out. Ragged primroses out in the front border and  masses of red berries on the cotoneaster by the door. 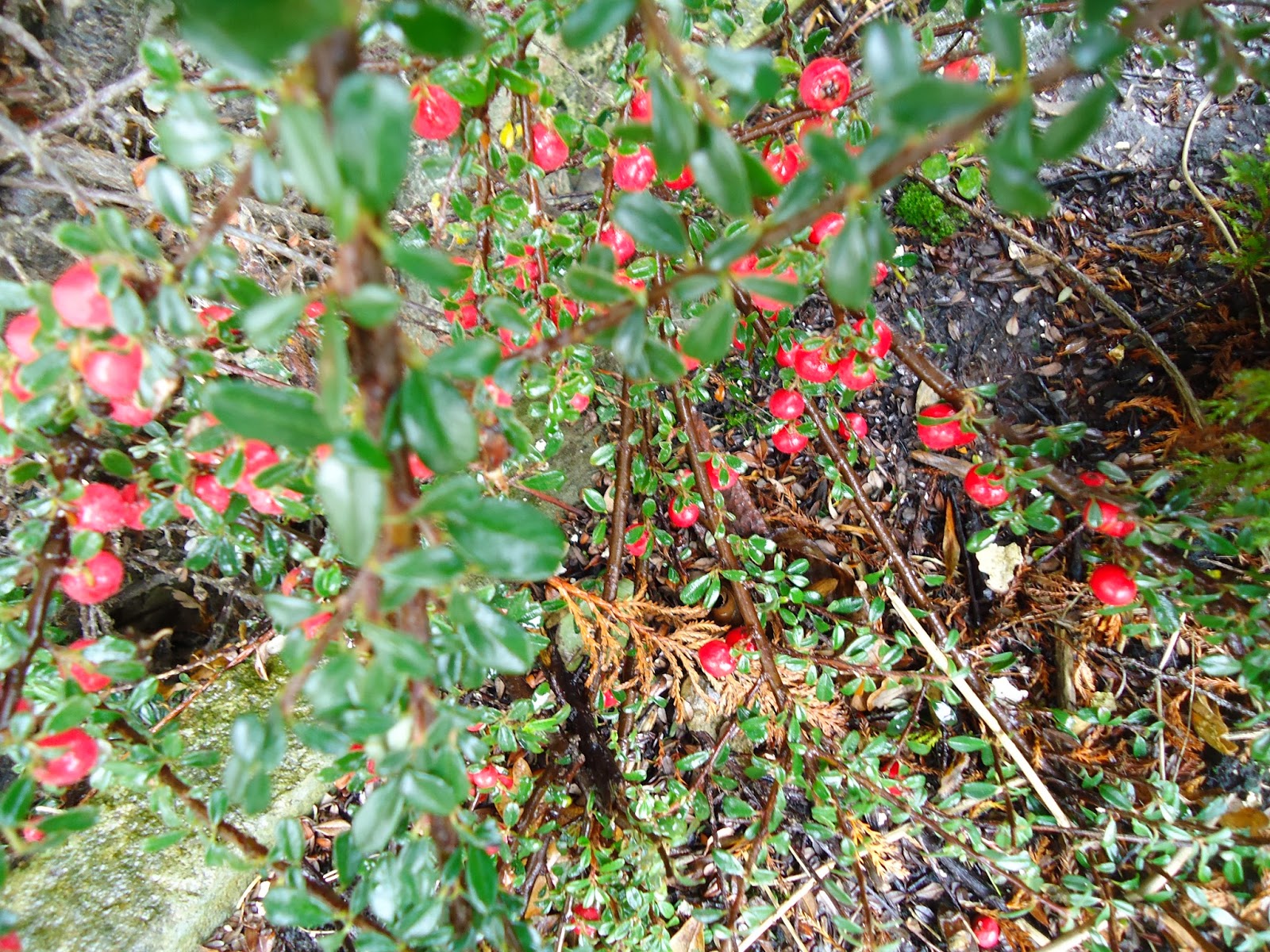 Did you notice the catkins, 2nd picture down? They're early this year, everything is.
Posted by Molly at 13:11 31 comments:

Every Once In A While

I found this on You Tube and I love his voice - Kurt Nilsen, Norway World Idol 2004 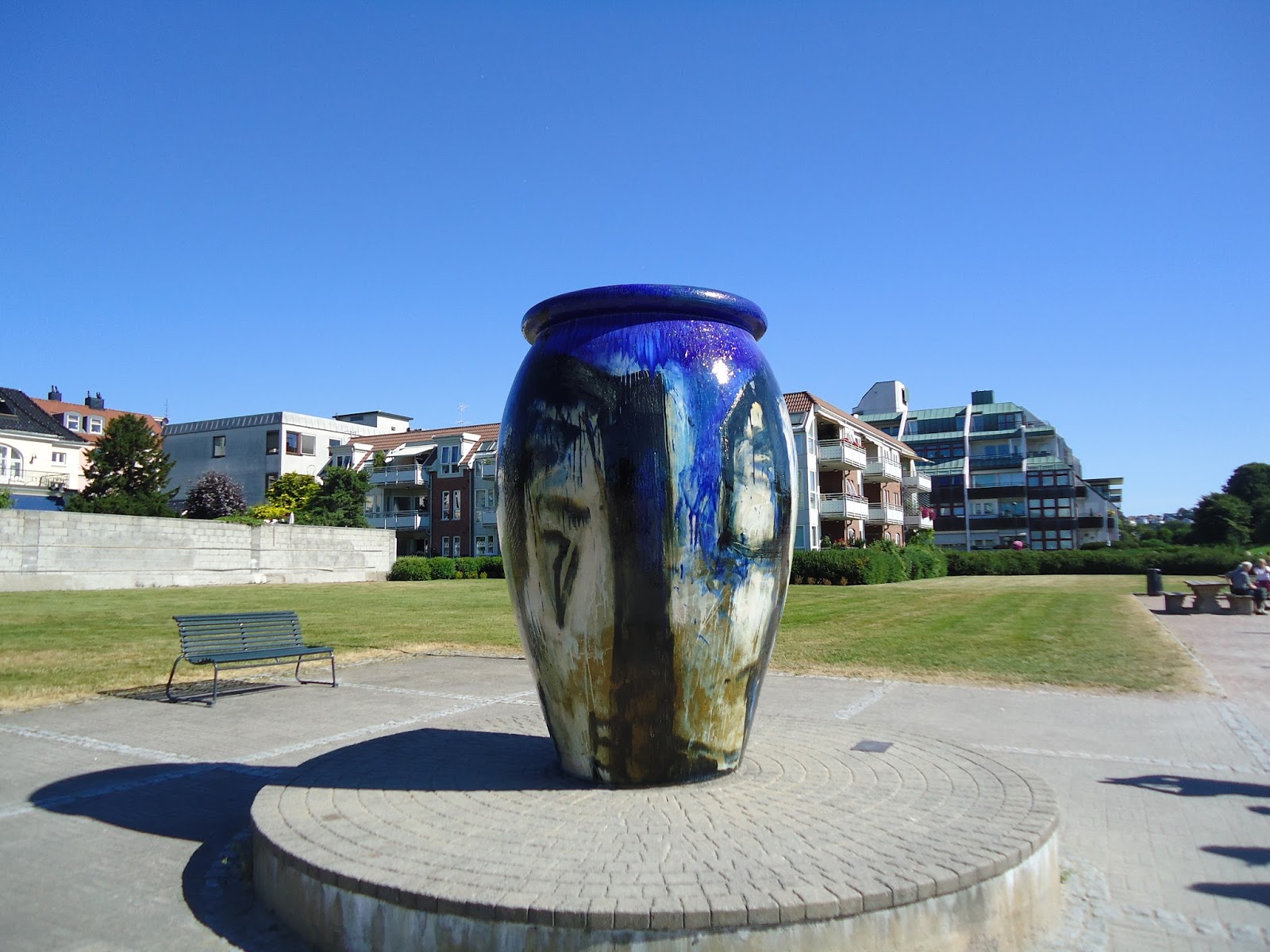 Nearly six months have gone by since we had our holiday. It cheers me up a bit, when the days are short and the weather's rough, to look back at some of the photos we took. 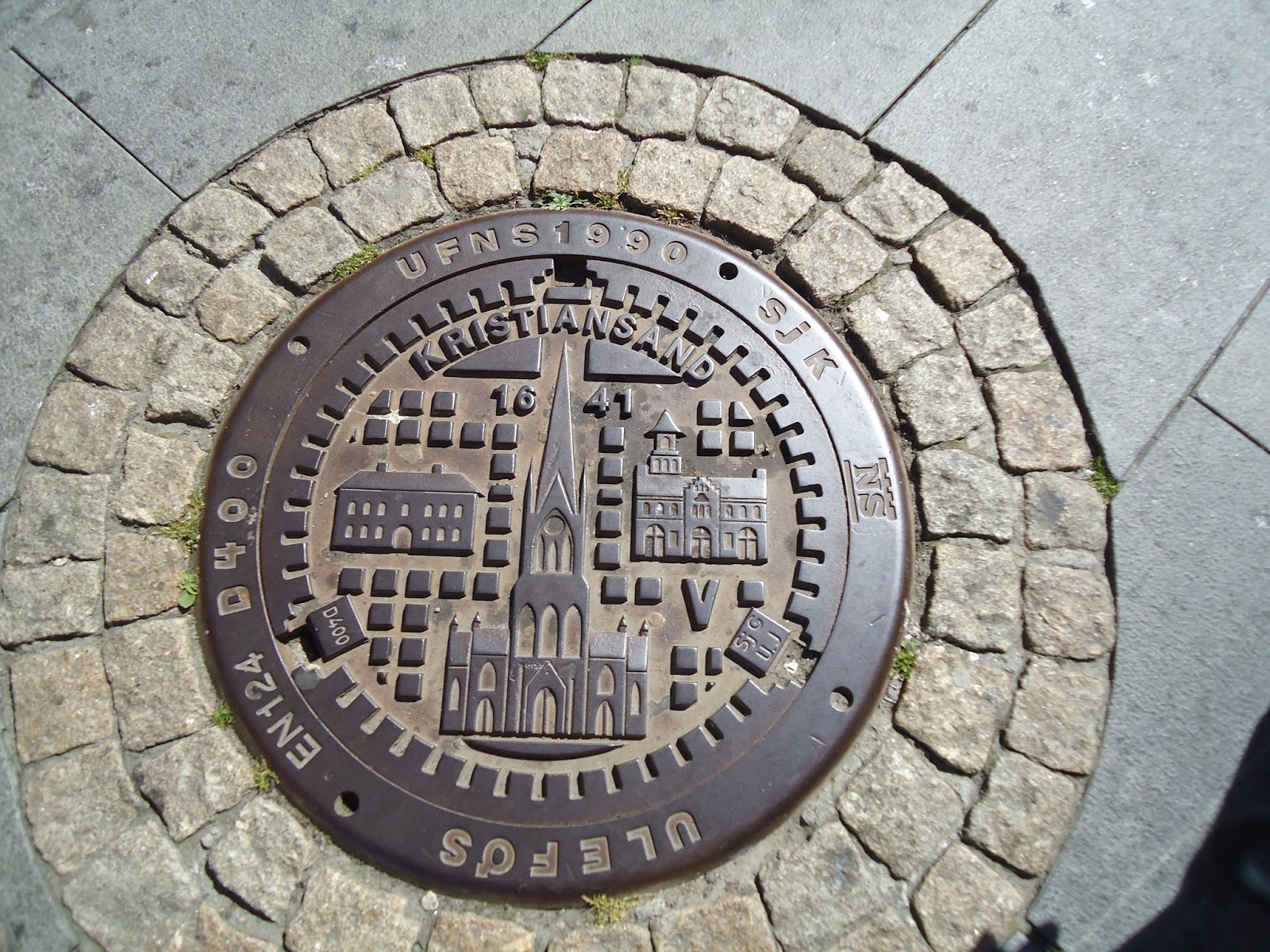 Our first stop off was in Norway,  Kristiansand. A beautiful little harbour town. The sun was  shining and wild flowers were out all along the path into the main street. What really struck me though was how the recession had hit over there as much or even more so than here. A lot of their economy depends on tourism - the shops were struggling - sales and slashed prices. A young woman was curled up against a concrete pillar, a small empty chipped pottery bowl by her feet. She was younger than my daughter. Her plight touched me. I tipped the meagre bits of Norwegian coinage I had in my purse into the bowl. Honestly, it was almost nothing. She reached out and held my hand for a few minutes and the communion of eyes said it all. It's winter in Norway now too. I can still picture her face. I hope she's OK.
Posted by Molly at 12:32 18 comments:

The Ace of Spades 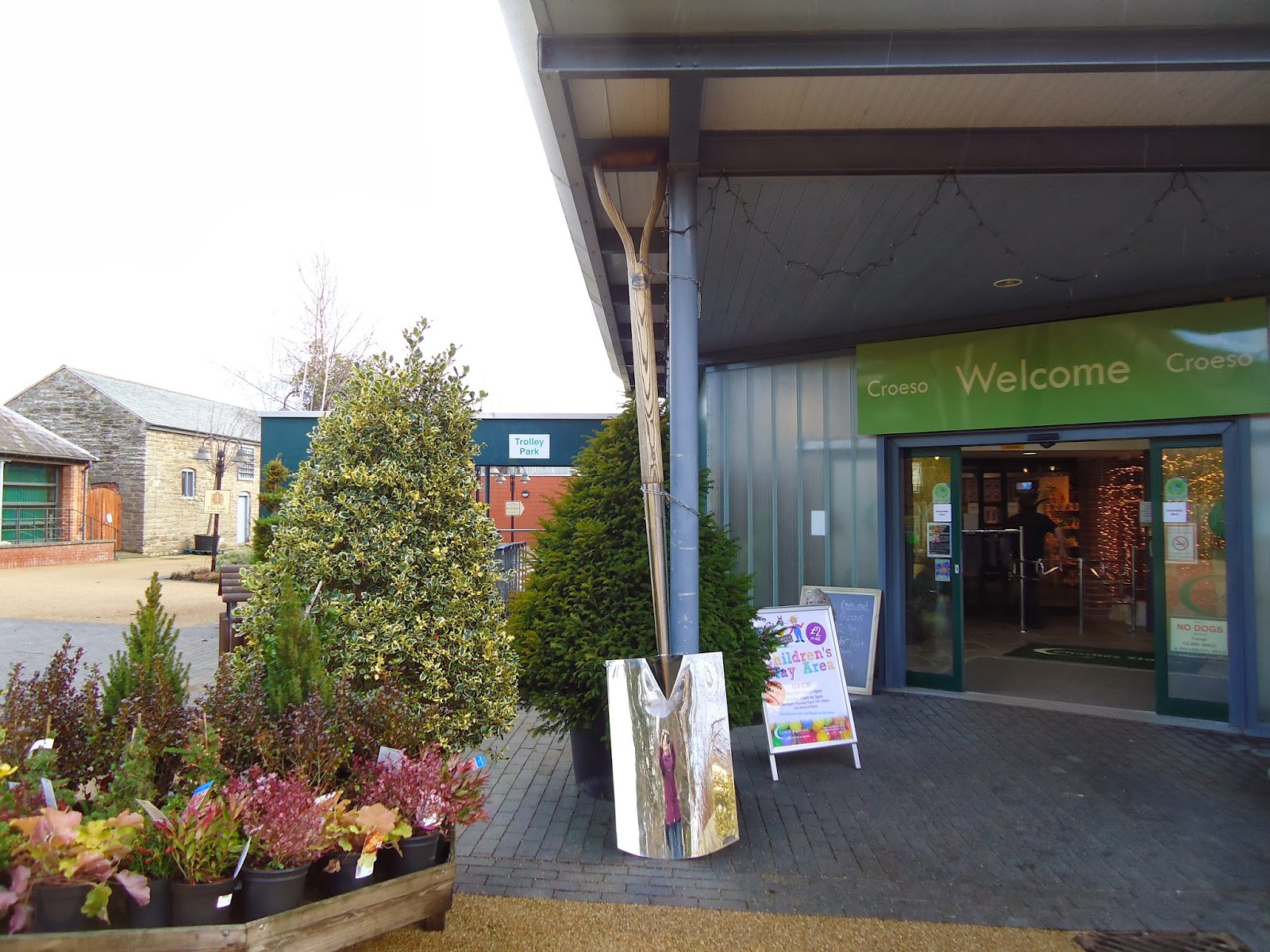 The sun shone a bit today. Actually it wan't too bad out at all. After days of battling through the floods and the quagmire, unblocking clogged up grids and attempting to tame a rampant brook we really felt like getting out and going somewhere. We went down to 'Coed-y-dinas' Agricultural Store just on the edge of Welshpool. All the Christmas glitz and the New Year celebrations well and truly packed away and the spades, forks, bags of compost, arrays of seed packets and chicken coops all there to tempt you to spend the last of your hard earned cash. Don't you feel so much better when the sun shines! Along with bags of coal for the Rayburn and a cylinder of gas for the Super Ser, I bought a huge bargain bag of daffodils for £2 - yeah, I know, they should have been planted last September/October, but £2 - two pounds  - too cheap to leave there for that. I shall be planting bulbs in the mud tomorrow if it doesn't rain again.
D'you like that great big shovel they'd got outside the entrance?   All I need now is to find the great big man to go with it and we'll get back on an even keel in no time at all.
Posted by Molly at 13:17 24 comments:

With a Few Good Friends

'Curley', though that wasn't his real name - I'm just calling him 'Curley' to protect his identity so to speak. He was my O/H's much loved uncle and what a character he was too. As far as I can remember, he barely ever moved more than a few mile radius from the farm on which he lived, except for that one time when he visited the Motor Show in London - but that's a story for another time. He died in 1978. I have his funeral service card in front of me now. The inscription on the bottom of it reads :-

Austin A40 Somerset 1952 Photo of similar from Wikipedia

You might have guessed, that there was nothing Curley liked better than a set of wheels. The year was 1955 and Curley had just bought his Austin Somerset. His car was similar to the pic from Wikipedia except the colour was Duck Egg Blue. In a small village like theirs it would't be too long before the word spread like wildfire. Come Sunday, he was more than willing to taxi his two sisters to Chapel. Dependant on the weather, it was quite common for the entire congregation to spend forty minutes inside and then another hour after the service, congregating on the pavement outside. Curley arrived early, parking his Austin Somerset in a prominent place to wow the ladies. He was just in the process of escorting his two sisters through the chapel door when Dai the Bank swanned up in his fire new shiny black, 6 cylinder, 2600 cc engine A90 with cream leather upholstery and parked smack bang two yards in front of it. 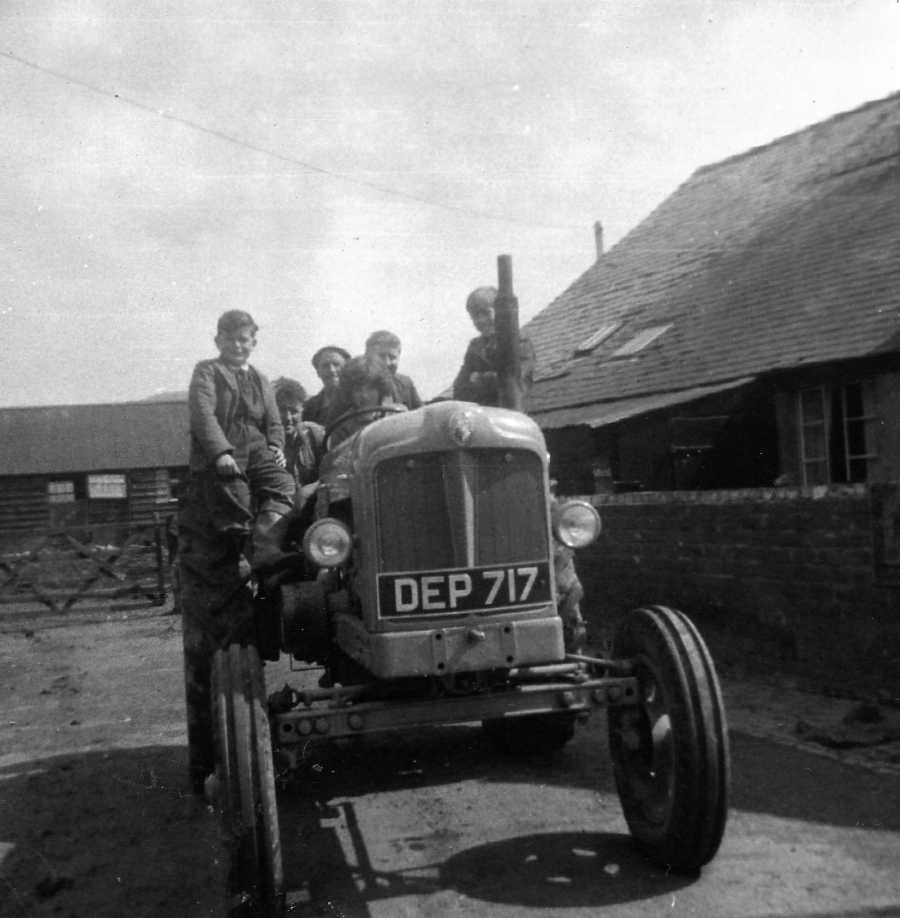 During the same year, a new tractor arrived on the scene. The old Fordson Major EN27 terrible- two-tank had been traded in for a diesel powered Fordson Major E1A. How many folks can you pack on a tractor? Well at least six! My future hubs (aged twelve) sitting on the mudguard next to Curley. The man at the back went by the name of 'Colonel' He was an expert hedge layer. His skill was much in demand around the neighbouring farms and he travelled from farm to farm on a BSA bantam motorbike. As he got older he moved into a residential home. As part payment for his labour he would ask whoever he was working for, if they would be kind enough to cut him a bit of best bacon off the hook in order to sweeten up Matron! Next to him brother George. On the right hand side, near the exhaust, young Derek from a quarter of a mile down the road. He loved to help on the farm. Sometimes the two boys snook off down the nearby canal gathering tangled floats and lines caught in the thorn bushes. These were often left behind by exasperated itinerant fishermen. And the prized possessions of the finders keepers. The young girl, Olwen in the driving seat's family lived in Birkenhead. During the heavy bombing raids of WWII. her heavily pregnant mother and her two step sisters were evacuated to the relative safety of the countryside. And they were billeted to Curley's farm not knowing what the future held. Olwen was born in the farm house bedroom two months later. The families kept in touch for quite a few years after the war ended and Olwen loved to spend her school holidays down on the farm. Life was good again!
Posted by Molly at 12:45 13 comments: