Things to do when you're grounded 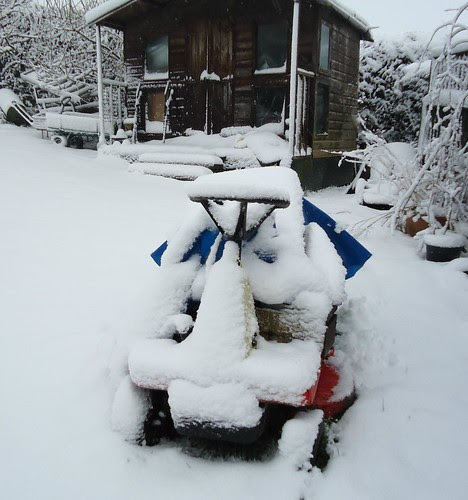 Yep, it's the same here as it is all over UK today. One of the things I haven't been doing is mowing the lawn. I'm in DIY mode, so hope  it lasts until I finish the job in hand (the mode I mean - not the snow). We are expecting  (hoping) that two special guests will be coming to stay over the Easter weekend so I've been (am) decorating the spare bedroom. The first job was clearing the stuff out and vaccying up the revelation of dust accumulation from behind two heavy wardrobes. There's a fire grate on the east wall, long boarded up to conserve  the minuscule bit of heat from the central heating radiator. We took the boarding away:- 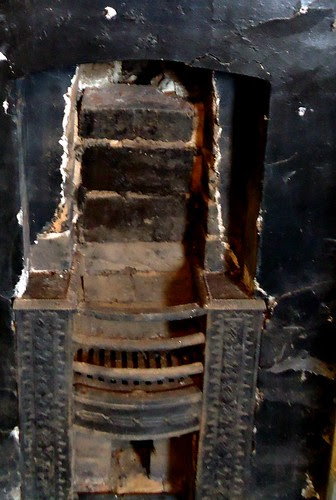 The black leaded grate hasn't seen the light of day for a few years. Isn't it fascinating when you find things like this, still intact. It had been bricked up just above the hearth, to stop the logs burning away too quickly. 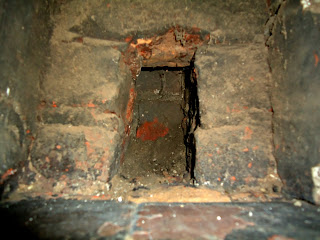 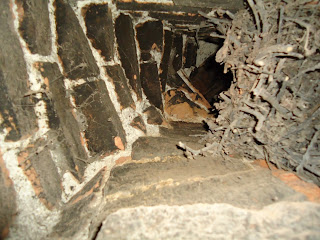 View when I aimed my camera up the chimney. Every spring the rooks used to build or attempt to build their nests at the top of the chimneys. We had to cover them over with wire mesh to try to stop them. They don't any more - the barn conversions next door saw them off  two or three years ago. Those twigs look as if they've been there a while. We counted  and calculated another eight fire grates (all boarded up) in various rooms around the house. Imagine what it was like for the farm labourers sawing all that firewood by hand  and the maids having to black lead and clean out all those grates to keep the fires glowing. 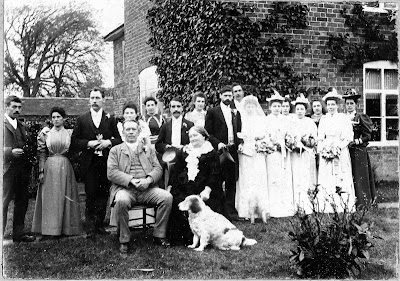 Among the treasures we found, were a pile of old black and white photographs. We believe this one was the wedding day of our old neighbour who lived here, taken outside our house four generations ago.
Wonder who'll be here after we've gone. Hope it doesn't all fall to pieces.
Posted by Molly at 15:21 28 comments:

Email ThisBlogThis!Share to TwitterShare to FacebookShare to Pinterest
Labels: D-I-Y 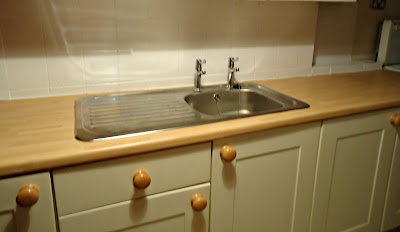 After what seems like an endless winter of non-achievement, today I finally got round to painting my kitchen, resealed the grotty bit between the worktop and painted the tiles with tile paint. Don't you feel good when you complete a job. Must be Spring or something.
Posted by Molly at 13:49 19 comments:

Email ThisBlogThis!Share to TwitterShare to FacebookShare to Pinterest
Labels: D-I-Y

How Green is My Valley - Not Very 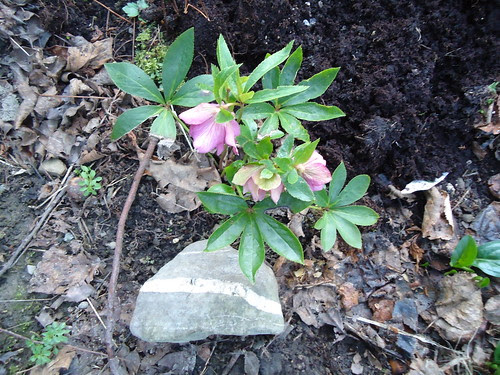 Yesterday, I intended to put one of my garden-y posts up. The sun shone for most of the day and I spent the afternoon, weeding and pottering about in the poly tunnel. Not that anything has started to move much yet. To be quite honest, I've hardly been out in the garden at all this year. It's just on the intersection between winter and spring and most of my garden looks a bit like the picture of the artichoke above, although the green spiky leaves are starting to shoot out from the base. 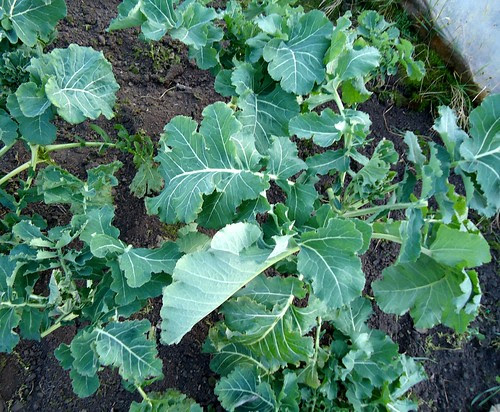 I planted some broccoli out in October last year and it's looking a bit promising - so might have a mini crop in about a month's time. 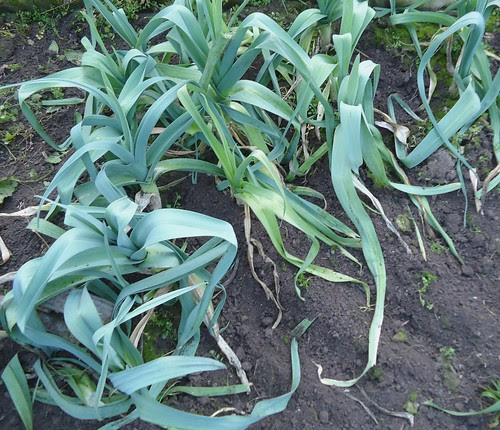 Those are the tail end of the leeks - still tender as yet but will have to be used before the end of the month - besides I could do with the ground to  plant lettuce and salad crops. I should do a plan really, but being a bit idle I just take photos and hope for the best. I sowed some spring cabbage, caulies and Kohl Rabbi last October too.  Planted them out at the end of December. They have survived the frost, snow and the slugs  as yet so maybe another crop there end of April, beginning of May.
Got some carrot seeds in buckets. What you do, is make holes in the bottom of either an old plastic or metal bucket. Fill it compost mixed with a free draining soil (a few pebbles or broken clay bits at the bottom to provide a good soak-away). Sow a pinch of  seed and cover them with a little bit of compost. They're usually susceptible to the carrot fly - little white maggots that bore through the carrots and make them inedible. This way, you can move them on to a bench or somewhere a bit higher where the fly can't reach. I did this last year and it worked quite well. 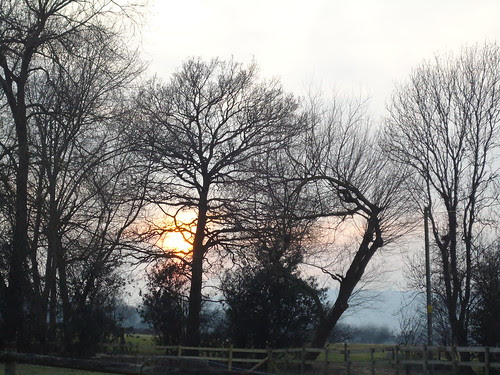 I took this picture, across the field, last night. This morning it was all thick over with freezing fog. What a game. I had to have a CT scan today with that purple dye they inject into your arm to see where any knobbly bits might or might not be lurking. The radiographer set me up on the machine. You have to lie on a bed with your arms up in the air while you pass through a sort of hoop. A dis-embodied voice gives you instructions - like hold your breath, while the camera flashes and the bed moves through the tunnel. The young man (not may years older than my granddaughter) who set me up was great. He told me that I would start to feel very hot and might even feel as though I was wetting myself (charming).  When it was all over, he said that he'd never actually had a CT scan although he'd operated the machine loads of times and asked me what it was like. I thought for a moment or two and then said, 'Well, it's a bit like sitting on a hot water bottle.' And you couldn't have a better day for it.
Posted by Molly at 14:01 28 comments:

All Leeks and no Daffodils 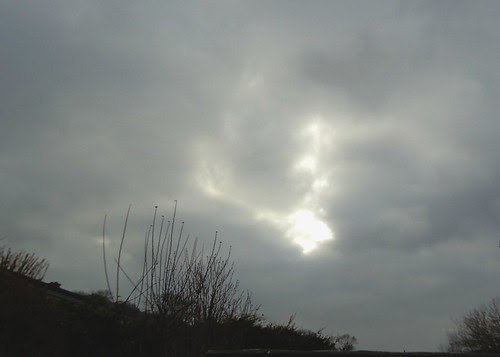 It's been that sort of day here today.
Delores over at Feathered Nest put a brilliant blog up on 'Wondering ......what if' ...'

And all my shallow little mind could come up with was this advert from way back. Remember it?

And that's just for those of us who've still got our own teeth.