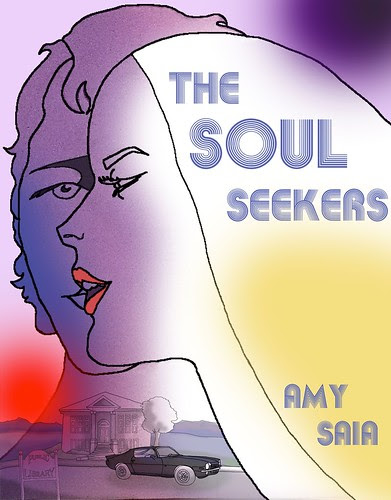 Hey Amy.  All your friends here in blogsphere are so thrilled for you!

Amy's (first) book, 'The Soul Seekers - will be on the shelves on August 7th 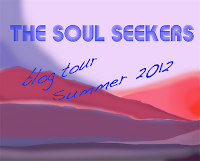 Click on the links below to catch the bus calling at .........
Book Bite Reviews
Whitney Boyd, Tanned, Toned & Totally Faking it
Jessica's
Angela Brown in a Pursuit of Publishness

My Interview with Amy Saia
Amy, how old were you when you started to write?


Well I remember trying to illustrate and write a book at about 8 years old, then at 12, I attempted a young adult novel with a brother and sister switching voices every other chapter. I had visions of being on 'The Tonight Show' with Johnny Carson as the youngest novelist ever.  It's fun, I was always trying to do something fabulous so I could be on that Tonight Show couch! Unfortunately I didn't finish the book but it did teach me about getting into a character's head. Also any writing is one step toward better writing. I've continued to work on little stories and poems, but music is my main passion.


Did you ever read them out to anybody?


Only in a creative writing class. I was still pretty naive and undisciplined. I can see now where I had talent, but not enough sophistication. At about that time, though, I sent out a few poems to a literary journal and received a very detailed note back. I showed promise it said, but little things should be tweaked. My tender psyche took it as a big rejection, but I know now that such letters are rare. Had I kept working .....................  My instructor also held back an essay I'd written about one of my favourite films of all time 'Il Postino'. She said she wanted to use it in future classes. I remember being very pleased as I've always sought appraisal from teachers and such. But, again, music pulled me back. It may sound trite, but music and the literary world, as well as intellectualism and philosophy have fought for my time and attention. I go back and forth constantly, trying to find balance.


'The Soul Seekers' is a tender love story. How long did it take you to write?


The first draft took a little over a month. It was a big blur of me writing in notebooks during the day, while my kids were swimming in the backyard. I typed it into the computer during the evenings, and if things were flowing well, late into the night. But then came the second draft, then the third, fourth, fifth. The more I wrote, the more I grew, and as such I felt the need to edit, edit, edit. They say a manuscript is good to go when you find yourself changing commas back and forth. My problem went deeper than that: I had a rough first few chapters that needed fine-tuning. After a rejection from a dream agent, I paced back and forth just trying to come up with something clever. In the end, I had to go with what I LIKED  and what was true to the story. You have to live with a book for the rest of your life, and if you don't like it, then why should anyone else? Just like life you have to stay true to your convictions, and those that appreciate it will stay, those that don't won't.


Have you any plans for a second book?


Oh yes. Grin. Yes. I think I need a small break from writing to work on some songs, though, then I will be able to concentrate on finishing up a manuscript again.

Email ThisBlogThis!Share to TwitterShare to FacebookShare to Pinterest
Labels: Writers and authors

My Internet connection is diabolical. When I try to make a comment it disappears before I have time to jab the 'post a comment' button, My favourite sites take an age to load and it's driving me spare. Provider Please Note
It was Cro's Birthday on Sunday - so if you read this Cro - happy belated birthday for Sunday.
I have a special post I want to put up tomorrow so keeping my fingers crossed.
Is anybody else having internet problems or is it just in darkest Wales?

Not Much Fun is it?

Who used to say that? I think it was Beryl Reid with a Brummy accent or was it Wilfred Pickles? Going back a bit anyway. We all had enough of the rain don't you think? Cro's garden looks fantastic - mine looks like a weed laden paddy field. Been doing a bit in the poly tunnel when it's not too hot. We've got some runner beans ready in there, beetroot and red cabbage and the sweetcorn's starting to form little cobs.


Got loads of green tomatoes which don't look like ripening. 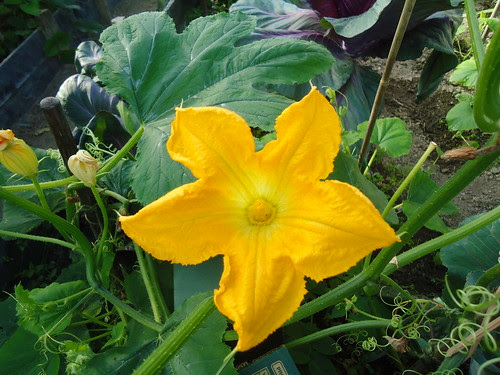 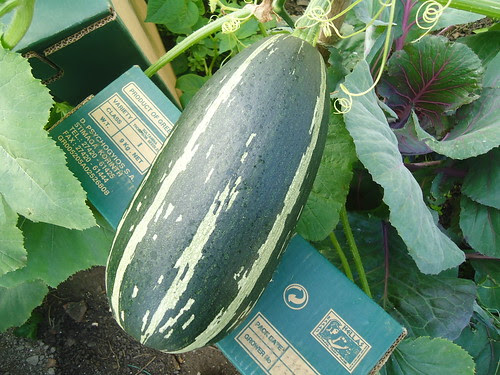 And two marrows on my marrow plants. I grew them from the seed I saved from last year so well chuffed with those. I've got them supported on cardboard boxes which according to the writing originated from Greece - and I would imagine it's not much fun there either at the moment with their economic situation like it is. I saw a documentary not long ago about people my age, scrabbling through the garbage bins looking for something to eat. That is awful. We love to share our surplus veggies with anybody who hasn't got any. I read somebody's blog over in America where they were setting up food banks. People who'd got room in their gardens were planting an extra couple of rows of veggies to donate to the food bank and then it was distributed to anybody going through a hard time. I think this is a brilliant idea. I love planting and gardening and I wouldn't find it any trouble at all. My father-in-law used to sow an extra couple of rows of potatoes in his field and at harvest time, the local children came to help pick the potatoes - they didn't get paid in money but they had their share of potatoes from the extra rows and loads of laughs and fun while they were doing it. 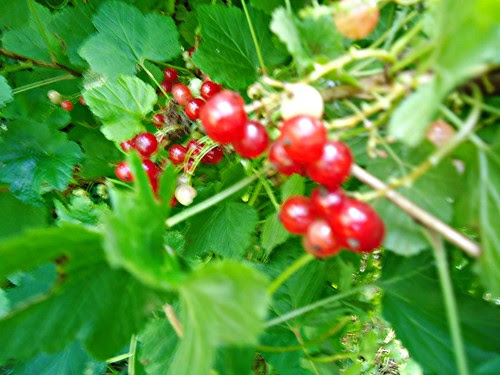 The upside of all the rain is the abundance of fruit. The apple trees and currant bushes are loaded this year. I made a whole load of red currant jelly yesterday which even for me is pretty good.
Have a good weekend. 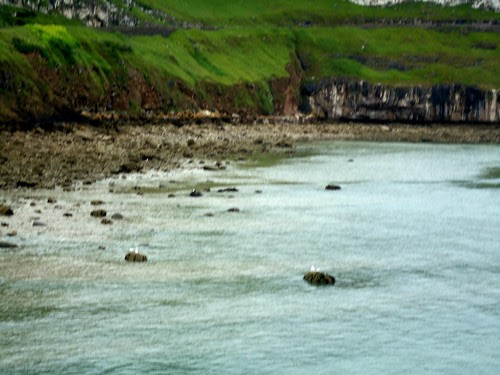 We went on our annual day trip to Llandudno 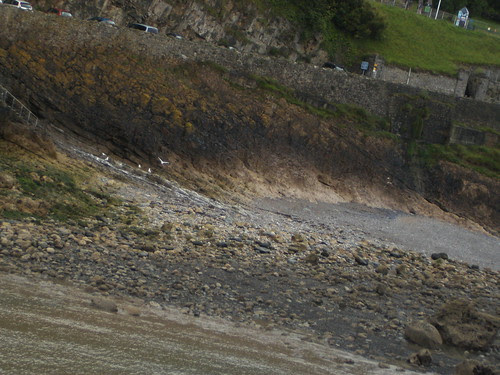 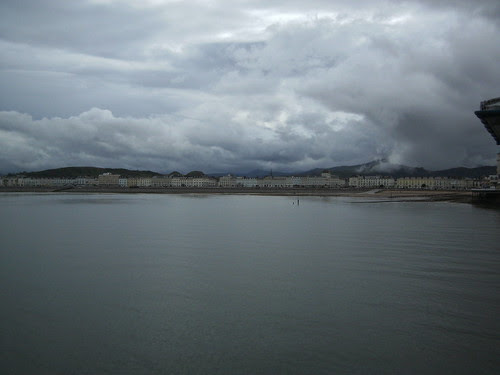 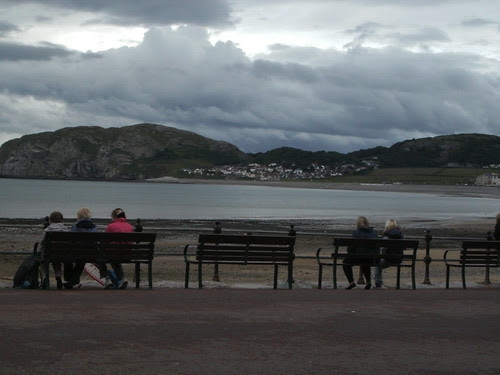 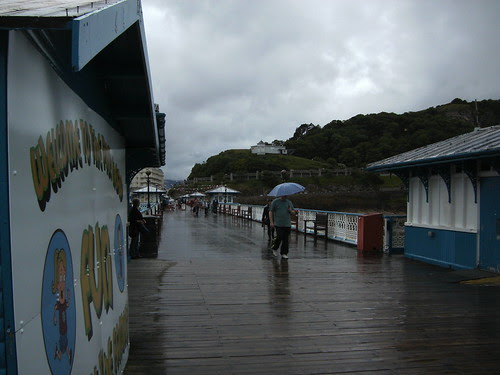 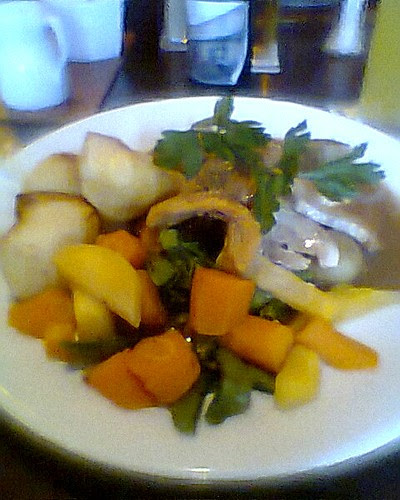 So we had a really nice pub lunch at Albert's, sat at a table by the window, watched the weather for 2 hours and then we came home.
How was it for you?