All Around The World

Two more shopping days until Christmas.  However carefully you choose, there's a hair's breadth between buying your nearest and dearest exactly what they'd like and what you might imagine they'd like. I read an interesting tid bit in the Daily Mail about how to read body language on whether your chosen ones like what you've chosen  - here's a link on Choosing what to buy

We had an unexpected Christmas present the other day. A recent storm had brought a tree down on my brother-in-law's farm. He phoned us to say that he was cutting logs up and would we like any?  We have a solid fuel Rayburn which eats logs like they're going out of fashion. With the soaring electric and central heating oil prices, I have to say that its recently come back into fashion with a vengeance. He chopped them up on his log splitter in the pouring rain and we loaded a Transit van full. We're having to dry them  in the Rayburn oven,  a few at a time before we burn them, but the bestest present out.

Like everyone else in Britain, the floods and storms are on the way with more heavy rain forecast for tomorrow. It looks as if we could be hunkered in for Christmas Day. To you who call by - have a special, happy Christmas.  Keep warm and dry, love from Molly xx
Posted by Molly at 13:47 26 comments:

All I want for Christmas

Email ThisBlogThis!Share to TwitterShare to FacebookShare to Pinterest
Labels: cats, Christmas, i pad 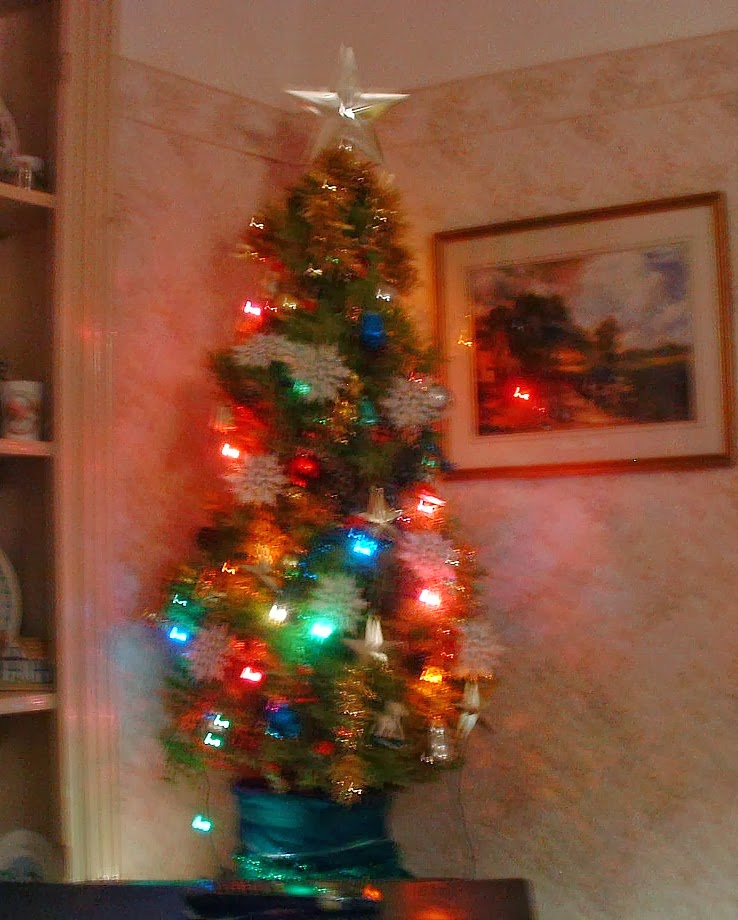 It went quite well, as far as PCC meetings go. The rector mentioned in passing that one of his neighbours was about to cut down some over grown Christmas trees and was happy to donate them to his three churches if they would like them. We all nodded in unison. The weeks flew by and it was the day of our Carol Service.

The church warden popped down to the church a couple of hours before the service was to begin, just to check that the heating had come on properly and that everything was as it should be. Aw no! A huge Norwegian Spruce was lying prostrate, sprawled out in the aisle, blocking all access to the front of the church. The branches flopped across the pews on either side so nobody could sit down either. Racing outside to find a container, she thankfully discovered a biggish blue plastic bucket by the tap under the yew tree. No time to lose, she filled it with some liftable stones. Picking her way, over the prickly branches, with panic beginning to rise like high tide, she tugged and she pulled, pushed and grunted. She was only five feet three and this monster had to be all of eight feet. Supreme effort and dripping in perspiration, she managed to get the thing to as near the lecturn as she could. Bucket filled and tree at last upright even if it was leaning drunkenly against the north wall.

At this point, the door creaked and a lady walked in. She said that she lived a distance away and had come as she did every year to visit her husband's grave. Noticing the lights on, she ventured into the church. They chatted for a little while as she shared her life story. After she left, the churchwarden zipped home to take the decorations off her own tree and attempt to cover some of the nakedness of  the inebriated giant.

Breathless, churchwarden finished and hoovered up minutes before the first of the congregation arrived. Goodness knows what she looked like. The service progressed. The last lesson read and the last carol sung. The lady sitting in the seat behind, tapped me on the shoulder. She said how shocked and disgusted she was to see almost nothing on the Christmas Tree. Considering this thing, (like I said) was towering eight feet and our own tree, less than three, it didn't really come as a big surprise. So I just nodded in agreement.

All the way to Hereford 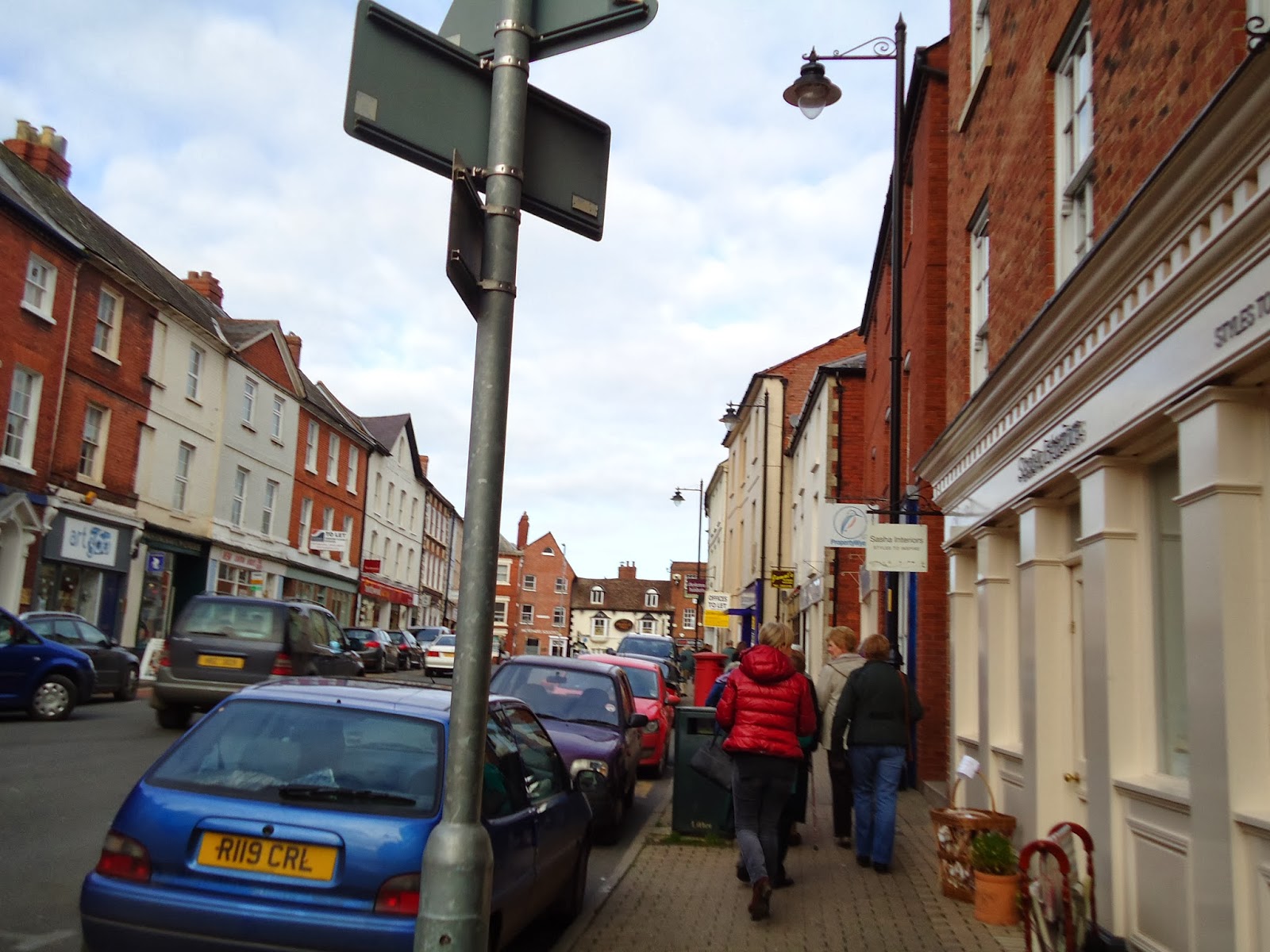 We went down to Hereford last week. When I'm somewhere where I'm not sure of my bearings, I take a picture of the street where I'm starting out - I find it helps you to find your way back. 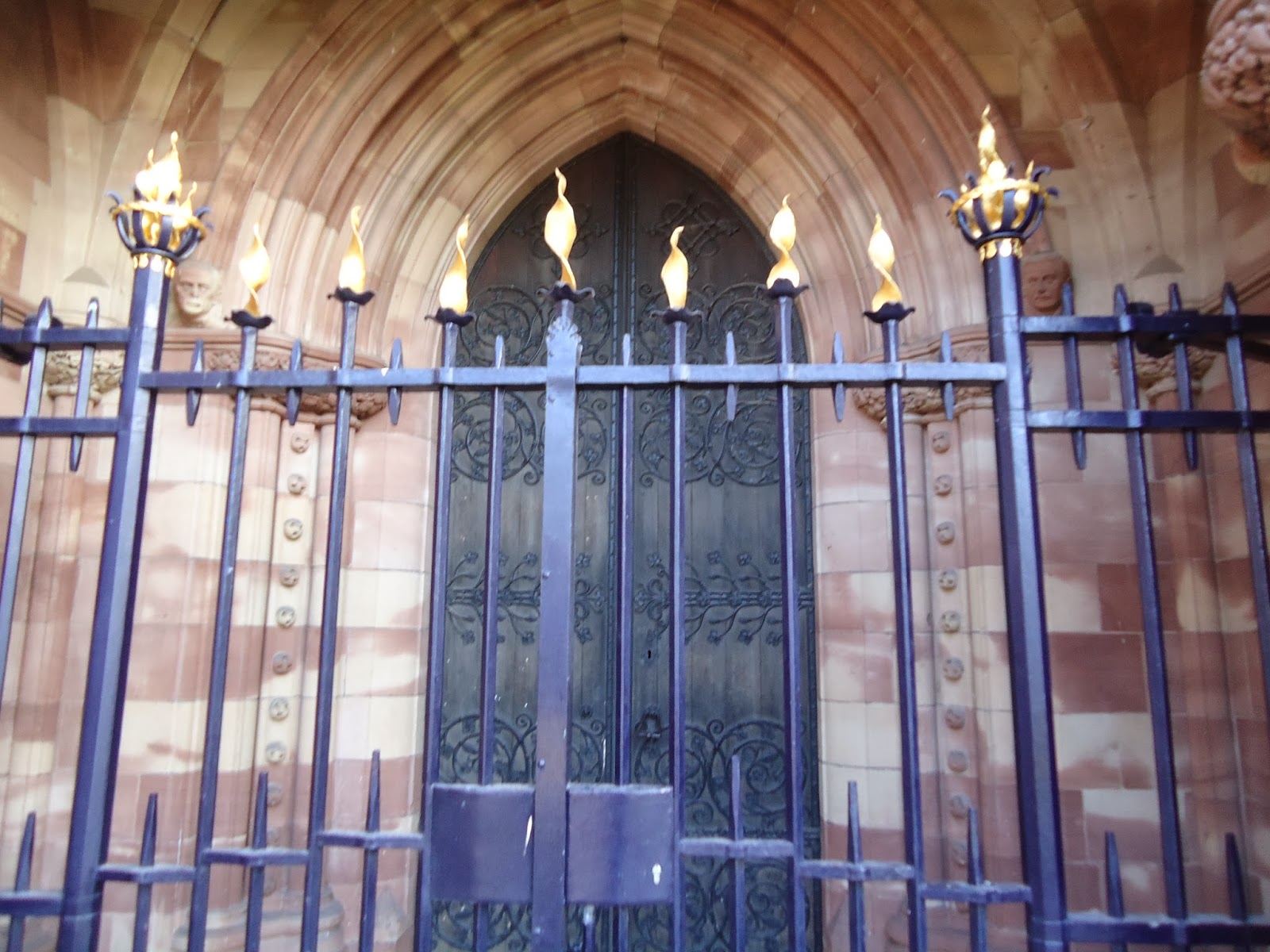 We were near to Hereford Cathedral. The wrought iron and 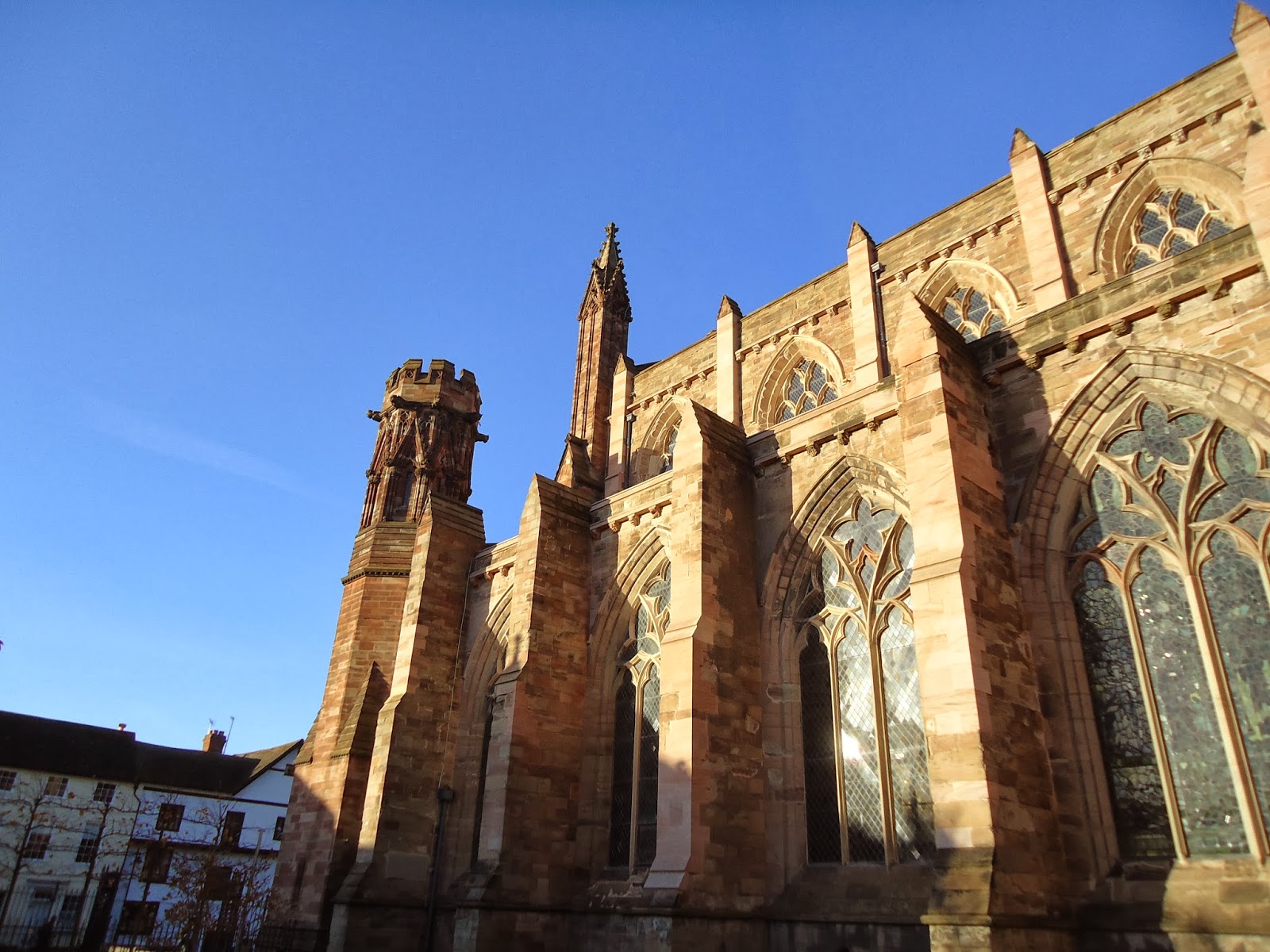 the architecture were just amazing. 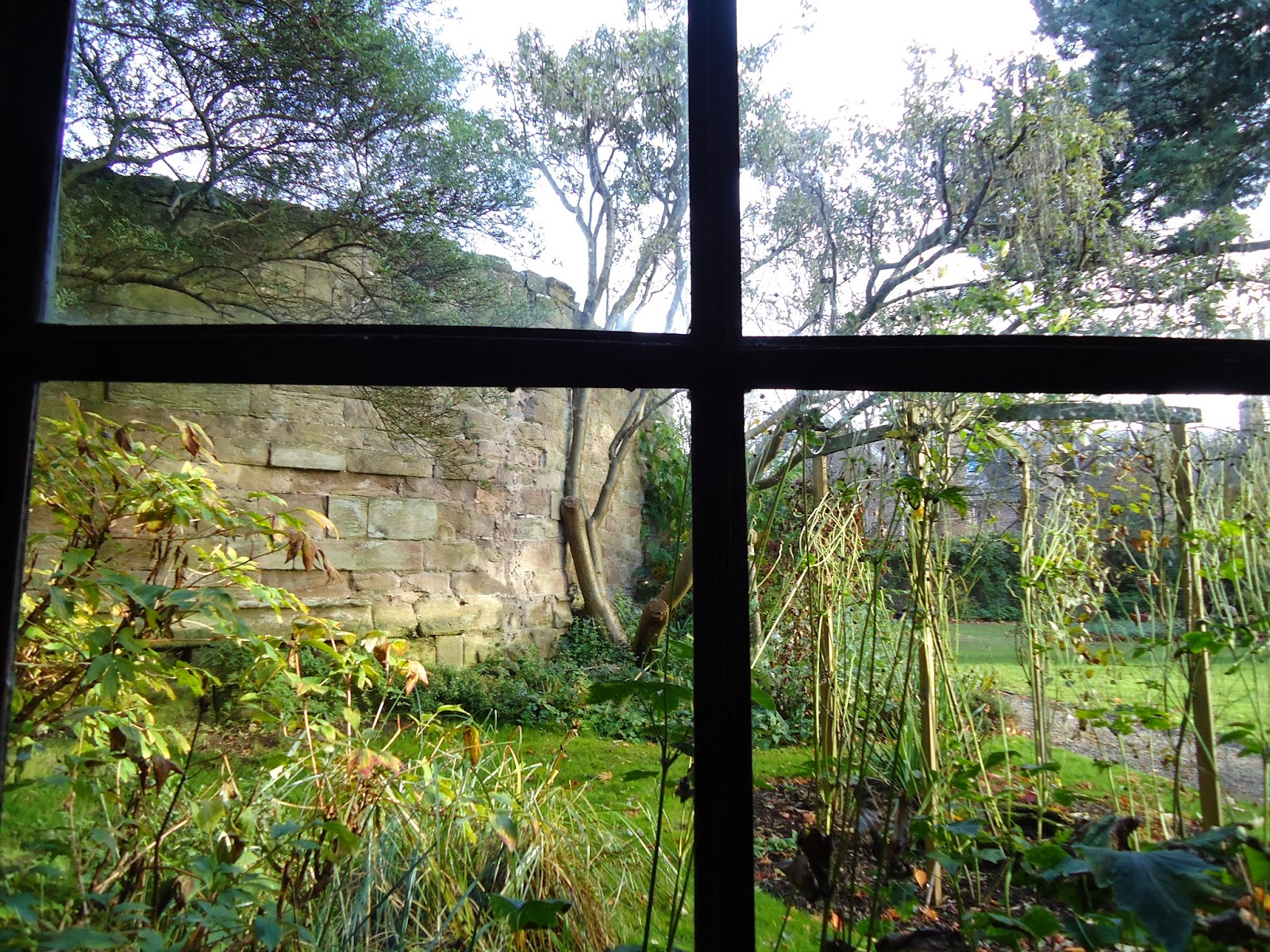 A heavy studded wooden door from the Cloister Cafe led out into a small courtyard. 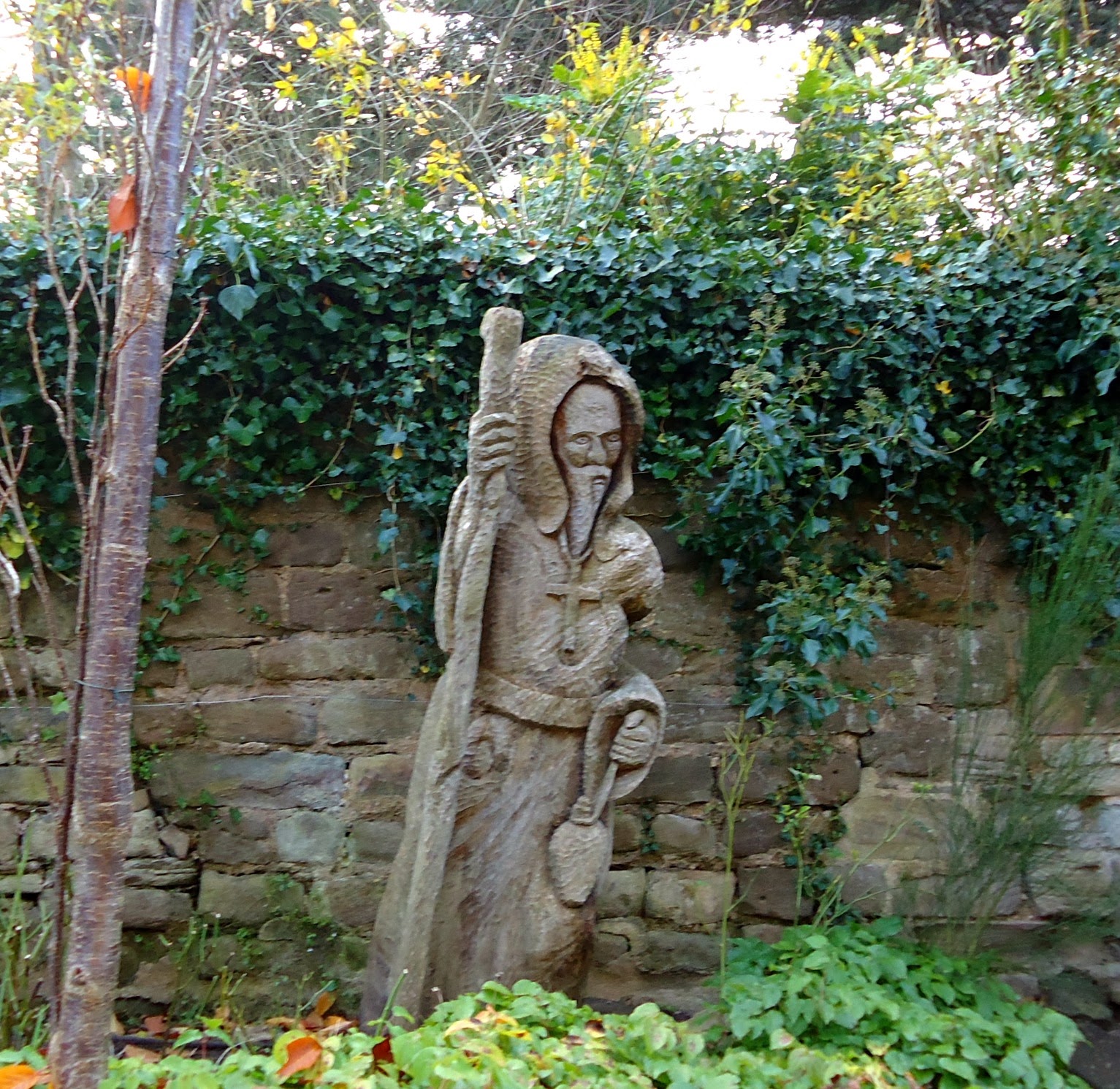 A saint in the garden - but I don't know which one. An ancient stone too. 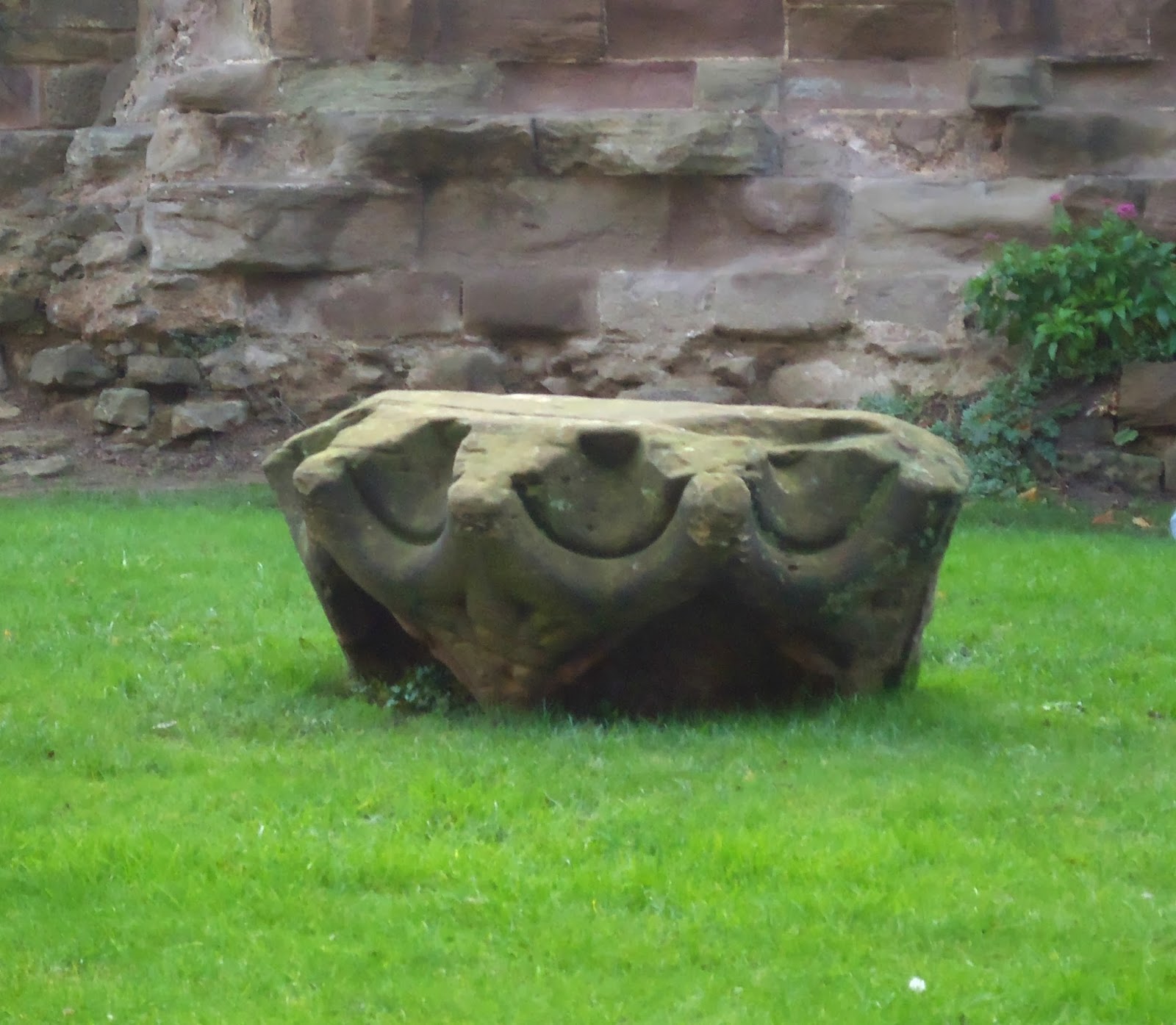 We went back through the narrow passage way to the library. (Not allowed to take photos in there) But we saw 13th century Mappa Mundi - Map of the world as it was understood then. Went through the chained library. The books were chained on the shelves by their spines. Learnt a little of the history.   The cathedral had  been built as a dedication to St Ethelbert who was beheaded by King Offa.
Hereford Cathedral link can tell it better than I can. 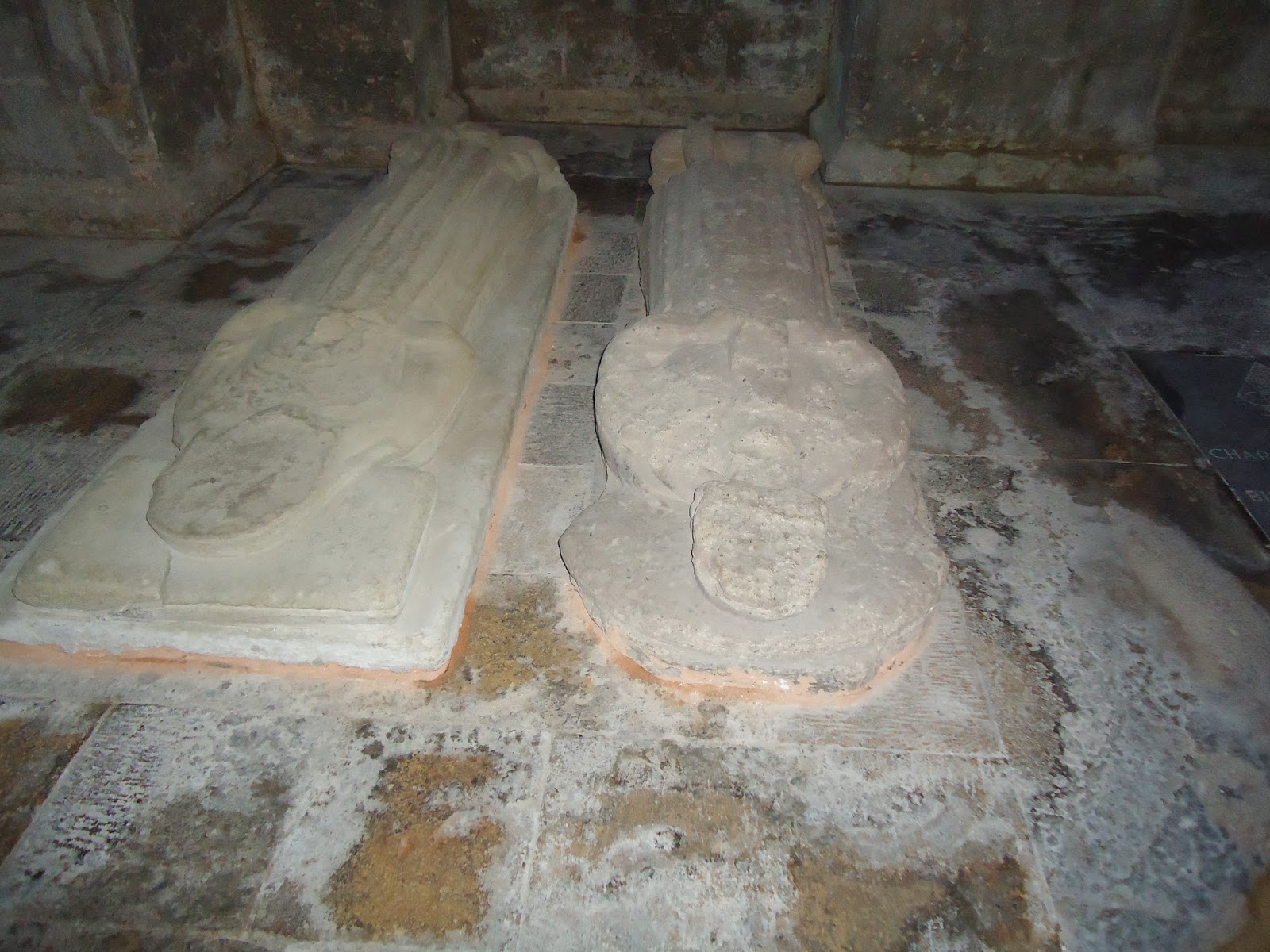 We wandered down into the crypt. Stone cold in Hereford 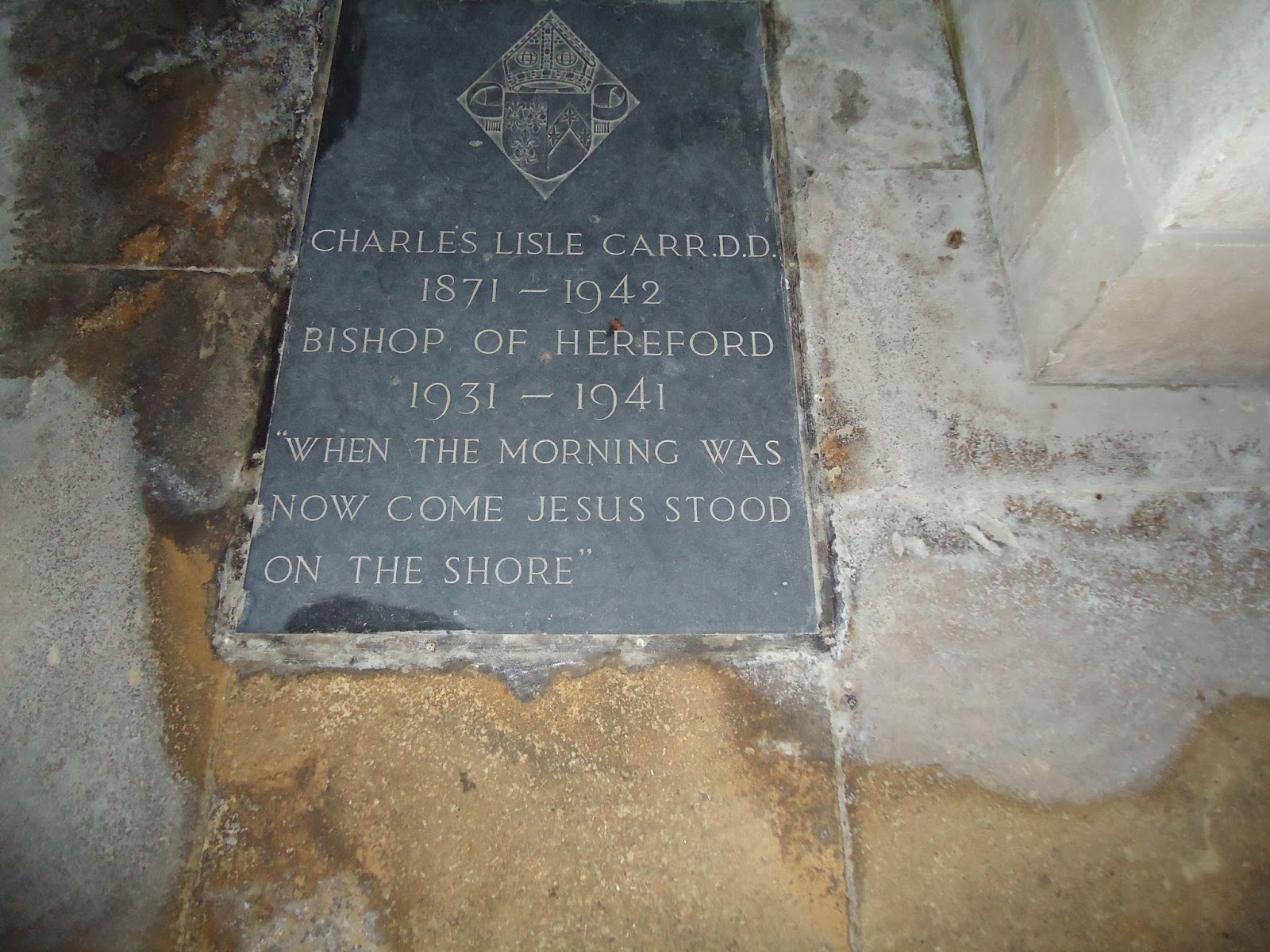 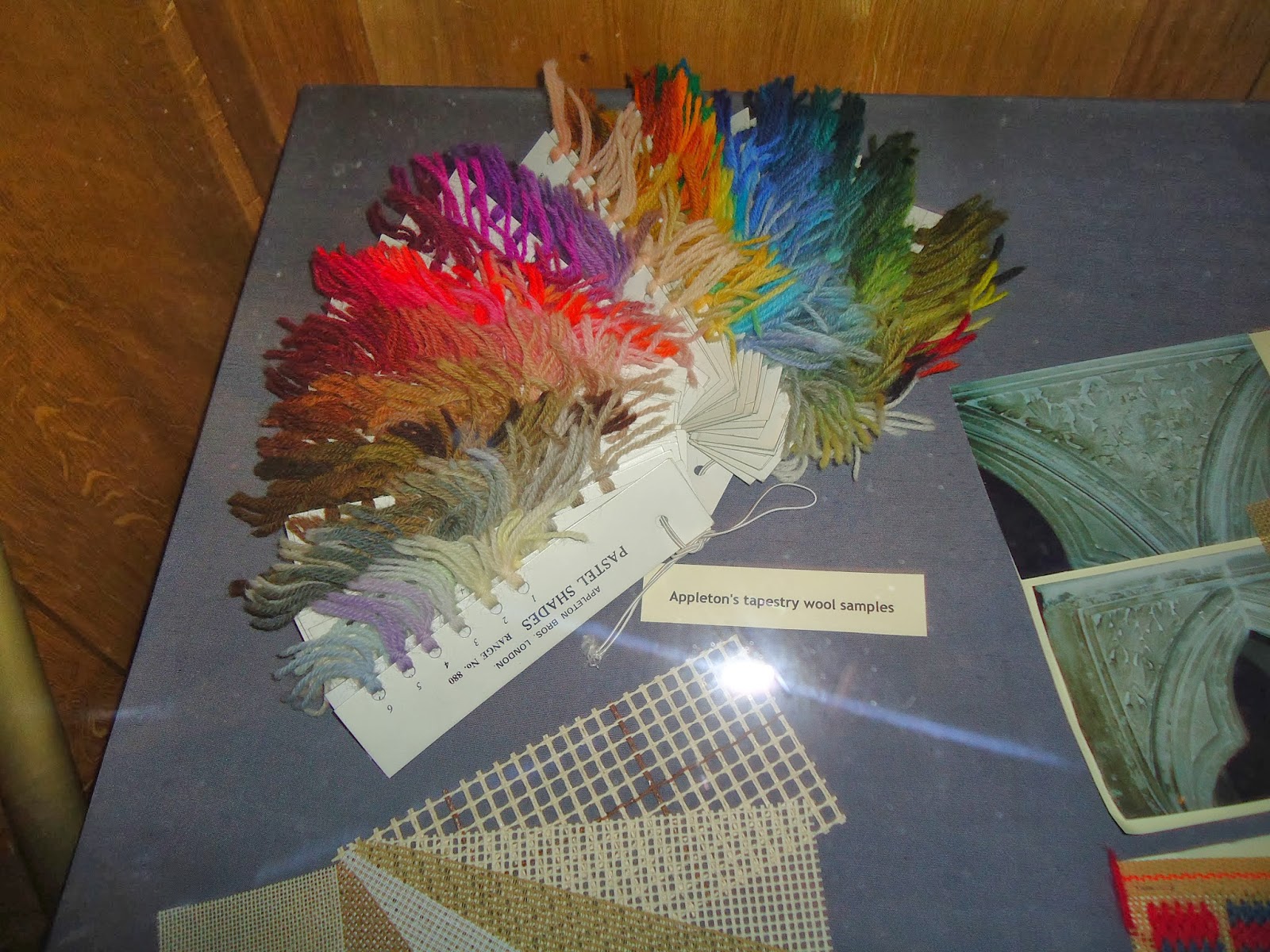 We were told how the cathedral had flourished on the wool trade. The colours of the wool displayed in a glass case were beautiful. 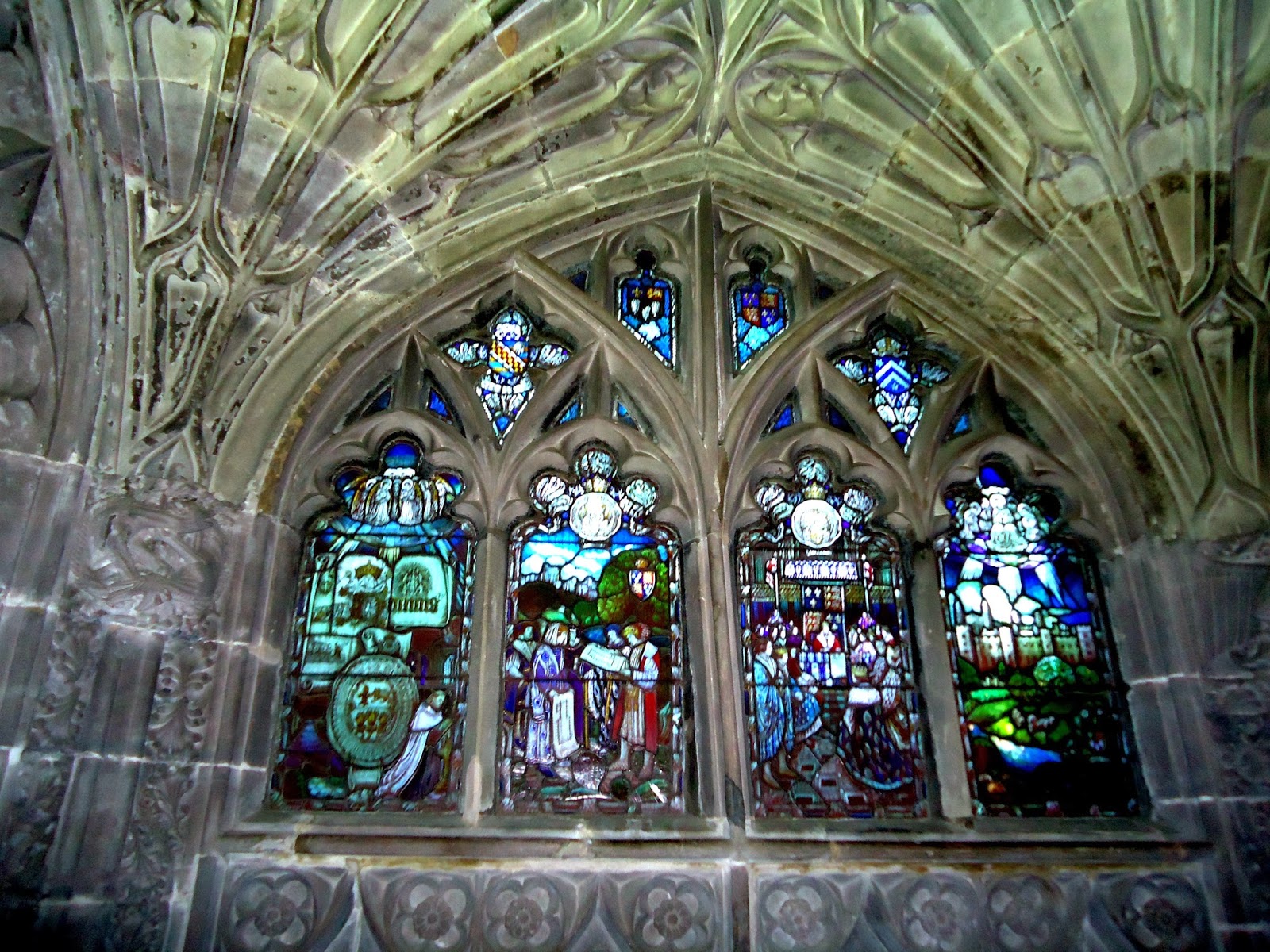 As were the stained glass windows. 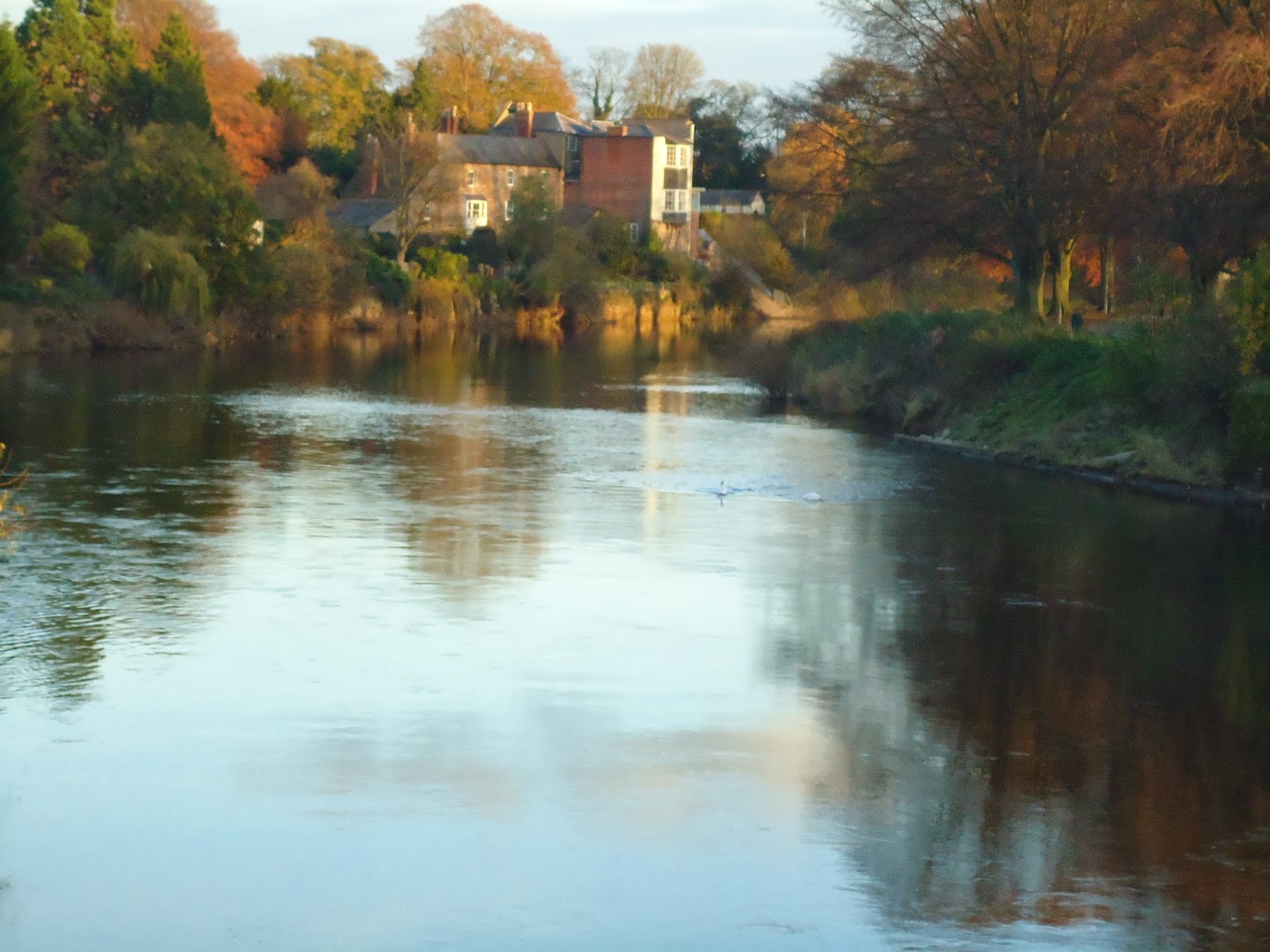 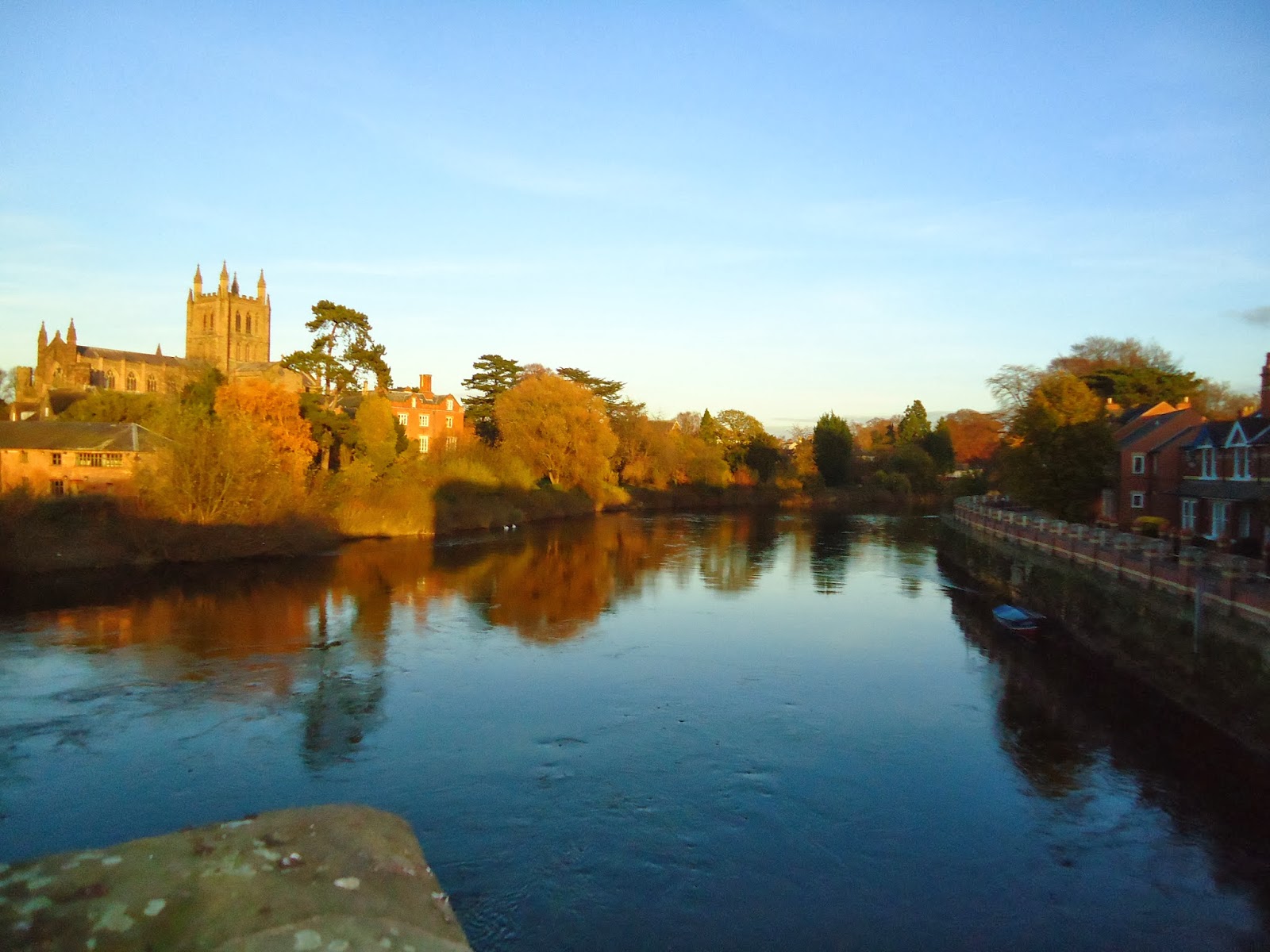