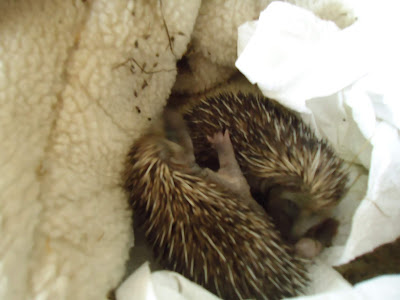 Last Tuesday evening my neighbour, Jackie brought her Scottie and Jack Russell for a walk up the lane past my house as she often did. She walked a few yards up the lane to make a phone call leaving the two rips on their own for a few minutes. All of a sudden, Jack Russell dived into the hedge and brought out a brown ball in his mouth, dropping it smartly and then brought out another and another. They were little baby hedgehogs. Neither of us knew what to do. I found a cardboard box, lined it with dry grasses and straw and brought them in. I knew that if we popped them back into the hedge their mother would reject them because of the scent of the dogs. I looked up the RSPCA site on the web. The advice - take them to an animal welfare site, which is fine if you don't live 2 miles from the middle of nowhere, it's not 8pm and the nearest site probably around 50 miles away. I found an old fleece hat, made a nest for them and fed them with warmed up semi skimmed milk through a small syringe. One didn't make it through the night but the other two are doing OK. Hopefully they'll make it and live and eat eat all the slugs munching on my cabbage and lettuce. 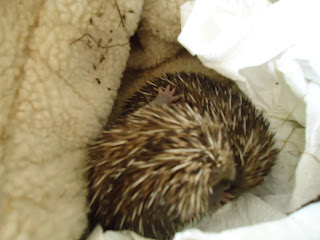